The run-out incident involving Dhoni and Irfan, happened in the RPS vs KKR match at Kolkata in IPL 2016.

The controversial run-out incident between MS Dhoni and Irfan Pathan in the KKR vs RPS game of IPL 2016 has been doing the rounds on the internet ever since. The incident where Dhoni plays the Sunil Narine’s delivery towards backward point expecting a his partner at the crease, Irfan Pathan, to rush over for a single is a difficult one for spectators to anaylse as to whose mistake it was. Nonetheless, both of them were involved a terrible mix-up and Dhoni was clearly angry at his Rising Pune Supergiants (RPS) teammate. To ignite the controversy even more, the video of the incident was removed from YouTube and the IPL website soon after the match. FULL CRICKET SCORECARD: Kolkata Knight Riders  vs  Rising Pune Supergiants , Live Score, 45th T20 Match, IPL 2016

Dhoni is one of the quickest runners between the wickets. He often runs the first run quickly and backs himself more often than not to get back in for a double. There could be plenty of reasons behind him getting agitated at the incident, of which any one might be true. Firstly, Dhoni’s mindset has always been to take runs wherever offered on the field. He doesn’t feel comfortable with slow-runners. Irfan is generally not among slow-runners but his affirmative response to Dhoni’s call and then the hesitation certainly was what made Dhoni angry. ALSO READ: IPL took down this MS Dhoni-Irfan Pathan video from their website and YouTube channel!

Secondly, Dhoni’s trust in his partners such as Suresh Raina and Virat Kohli over the years was a big factor in that run-out incident. Those who bat around Dhoni know that running between the wickets has to be top-notch, and easy singles will be converted into twos. Any one of them could have raced across Dhoni to complete the single — not even looking towards their captain as they know they can convert it — and would have dived-in to get that run. ALSO READ: MS Dhoni at fault in Irfan Pathan’s controversial run-out in RPS vs KKR IPL 9 match

Thirdly, Dhoni had played too many deliveries at that point and runs were not coming easily. The ball was turning and spinners were making it difficult for the batsmen to score. The field Gautam Gambhir had set, added to the pressure (if he feels any) and Dhoni was eager to keep rotating the strike.

Well, whatever happened in the field was unfortunate for RPS and it didn’t help their already poor campaign of the IPL by any means. Rain made matters worse and KKR cruised to victory after Yusuf Pathan’s cameo at the end.

And what would be amusing to know is the intention behind the removal of the video from IPL’s website and YouTube. 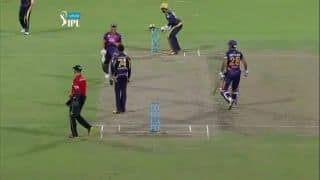