It is widely expected that the movie will only increase MS Dhoni's fan base and live forever like his legacy.

Cricketers in India are not only followed but literally worshiped. India have produced some remarkable players and kept the fans hooked to this game. It is rightly said that cricket is not just a game in India, it is a religion. Some players enter the game but never leave. Their influence always remains etched in the minds of their loyal fans. Sachin Tendulkar is a huge name in Indian cricket whose contribution will always be alive in everyone’s minds. MS Dhoni, India’s current captain in limited-overs, is another heavy name, whose small movements and gestures are also captured by media and people. The trailer of the much awaited sports biopic film, MS Dhoni: The Untold Story, based on his personal and professional life, has released and instantly became a rage on social media. ALSO READ: ‘MS Dhoni: The Untold Story’ trailer released

Ever since the teaser of the movie, helmed by ace director, Neeraj Pandey, starring Sushant Singh Rajput in titular role, was out, the curiosity increased further. Not only his fans, but media and other cricketers have been eagerly waiting to see Dhoni’s life unfold on celluloid.  The movie is based on India’s most successful captain’s journey on becoming the person he is today. It will depict his journey from an unsuccessful footballer to a celebrated cricketer worldwide.

The trailer begins by showing Sushant (playing Dhoni) helplessly telling that he does not want to continue working as a ticket collector but pursue his career as a cricketer. It shows that he was drawn into the game by his school’s sports coach, while he was practicing as a goal keeper for his football team. It captures Dhoni’s immense inclination towards batting, in particular, hard-hitting and aggressive nature as a batsman. The movie is also going to reflect on his relationship with his father, (played by Anupam Kher) who is shown as little apprehensive about his child’s future in the sport. READ: MS Dhoni meets Sushant Singh Rajput on sets of biopic ‘MS Dhoni: An untold story’

Pandey has also captured the glimpse of his school’s craze in watching him bat and how he used to pull crowds from an early age, chanting “Mahi Mahi“. The movie is sure to give an insight into the politics he faced which caused his downfall in his journey to don the national colours. Dialogues like “Arey yeh kaun genius log hain jinhe sirf 3 ball mein player ka potential pata chal jata hai”[Who are these geniuses, who judge the player in 3 balls?] and “3 ball keeping ke liye bhulaya aur ek over batting diya”[I was told to ‘keep wickets for 3 balls and asked to bat just 1 over], told by Sushant, depicts his struggles and rejections before making it large.

The highlights of the trailer is when it shows Sushant walking out from the pavilion to bat in the ICC World Cup 2011 final at Wankhede stadium. It also gives an insight into how Dhoni had to make tough calls, in the past, as Indian captain and leave out players, who once promoted him, on account of not being fit to carry on in the team. Sushant’s bold dialogue delivery where he says, “We are all servants and we are all doing national duty” is sure to meet with applause in theaters. It captures the calm and composed as well as in-your-face attitude of Dhoni, which the world is fond of.

He fought all odds, stood the test of time, faced rejections but continued his journey, which has now become his life. The movie looks neatly stitched by Pandey and Sushant excels in every frame as Dhoni, with his body language, dialogue delivery and playing style. The movie also seems to have captured the background and mindset of parents in Jharkhand wherein they are reluctant to promote their children in sports and try to keep them hooked to their books. In the end, people also get a glimpse of the 35-year-old’s personal life where the reel life Dhoni is seen romancing two heroines. It has added more spark in the highly anticipated movie. ALSO READ: ‘MS Dhoni: The Untold Story’ poster unveiled

The movie is slated to release on September 30 and expected to light up the box office. Dhoni has also shared a tweet from his official Twitter account proudly presenting the movie to the audience. From being a ticket collector, hailing from a middle-class family, he has become a sensation, proving a line in the trailer, “Dhoni Dhoni hai“. It is widely expected that the movie will only increase his fan base and strengthen his legacy. September 30, 2016 will put a rest to people’s speculations. Till then, sit back and enjoy the trailer! 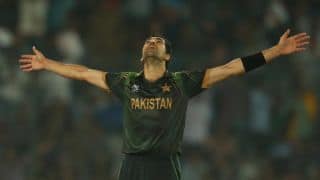