In what turned out to be a low-scoring encounter in the 25th match of the ongoing Indian Premier League (IPL) 2017, Mumbai Indians came out victorious by 14 runs against Delhi Daredevils (DD).

Malinga missed out on the fun: After being punished for a plenty of runs in the previous game, the veteran Mumbai Indians bowler Lasith Malinga missed out on a game in which bowlers had all the fun. After Delhi Daredevils skittled Mumbai out for a mere 142 for 8 in their 20 overs, Mumbai bowlers bowled with tremendous intensity to reduce Delhi to 24 for 6 in their chase. FULL CRICKET UPDATES: Mumbai Indians (MI) vs Delhi Daredevils (DD), IPL 10, Match 25

Rabada s impressive debut: To watch Rabada bowl in this IPL was one of the aspects to look forward to, and when his chance finally arrived, the South African pacer did not disappoint. He began with an erratic over but by the time his second over ended, Rabada had a wicket in his kitty. Rabada also affected the dismissal of Harbhajan Singh late in Mumbai Indians innings.

When Delhi were tottering in their reply at 24 for 6, Rabada teamed up with Chris Morris to add a vital 91 runs for the seventh wicket. While their partnership was enough to carry Delhi close to an improbable win from a situation they were in earlier, Rabada and Morris could not finish the game in the team s favour.

An umpiring howler: On the first ball of the 19th over, umpire Nand Kishore called a no-ball for overstepping when Rabada s foot was well within the legal limits. New Zealand s former cricketer-turned-commentator Simon Gould screamed for third umpire s intervention while the umpire signalled for a free-hit. The young Rabada, who bowled a terrific yorker outside the off-stump for a dot on the free-hit, did not carry any grudge against the umpire. He had seen what went wrong on the giant screen at the Wankhede. However, after completing his follow-through, the bowler tapped the umpire on his shoulder in compassion.

Rohit Sharma vs leg-spinners: On a comeback trail into the national side, Rohit has shown tremendous weakness against the leg-spinners. After becoming the hat-trick victim of Samuel Badree not long ago, Rohit once again fell to a leg-spinner Amit Mishra on this occasion. With Mumbai needing a strong stand, Rohit played one straight to the man at deep square leg and fell for a mere 5, which left Mumbai Indians struggling at 60 for 4.

Amit Mishra, you beauty: For someone who has been in and out of the national side on a consistent basis, it remains important to keep making the right statement. Mishra did exactly that on Saturday, claiming 2 for 18 off his 4 overs. Mishra mixed his deliveries perfectly, squeezing the life out of Mumbai batsmen, not allowing them to score runs in the middle overs at all.

Mitchell McClenaghan s night: In a game wherein bowlers had a lot to cheer about, McClenaghan had the most to cherish. His opening spell broke the back of Delhi Daredevils, reducing them to an embarrassing score of 24 for 6 inside the first seven overs. McClenaghan, who claimed the wickets of Sanju Samson, Shreyas Iyer and Corey Anderson to return with the figures of 4-0-24-3, was adjudged the Man of the Match.

However, on Saturday night, one of the boys took a splendid catch running towards his left. A stroke from Jos Buttler off Rabada was enough to clear the ropes, but displaying perfect technique, the ball boy ran towards his left and leapt in the air at just the right moment to grab the ball with both his hands.

Mumbai Indians on a roll: With six consecutive victories in last seven matches after losing their opening tie, Mumbai Indians have now equalled their best run in IPL so far. Mumbai Indians have also consolidated their position in the IPL 10 points table, with a lead of 4 points over the second-placed Kolkata Knight Riders (KKR). 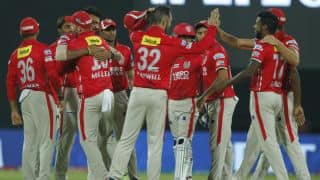