The first Day s play between West Indies and Pakistan revolved around both teams. But it was the West Indies that walked out of the field with head held high at early stumps due to bad light.

The first day s play between West Indies and Pakistan revolved around some excellent bowling at the start followed by a gritty batting display by the hosts. It were the West Indies who walked off the field with head held high at stumps drawn early due to bad light. The 118-run stand between Roston Chase (63) and Shane Dowrich (56) reviewed the West Indies which at one point were tottering at 71 for 5. Late onslaughts from Jason Holder (30*) and Devendra Bishoo (23*) have brought the hosts closer to the 250-run mark which is definitely a pleasing position to end the play at given the tight spot West Indies were once caught in. Let s have a look at some of the highlights from the first day s play that grabbed the attention: Live Cricket Scorecard, Pakistan vs West Indies, 1st Test, Day 1

Mohammads do early damage: Mohammad Aamer opened the bowling for Pakistan from one end and he generated a great amount of bounce and swing. Misbah-ul-Haq gave the new ball to debutant Mohammad Abbas from the other end and straight away he took no time in drawing the first blood. On the second delivery of his very first over in international cricket, Abbas got the wicket of Kraigg Brathwaite (0) making the batsman poke a back of good length delivery to Younis Khan at second slip. Live updates: Pakistan vs West Indies, 1st Test, Day One

Aamer soon joined amongst the wickets. He bowled well outside off stump swinging the ball away from left-handed debutant Shimron Hetmyer. But he nipped one back into Hetmyer and the youngster had no answer but to see his off stump go for a cartwheel.

Right-handed Shai Hope (2) too was dismissed in the same fashion. A series of deliveries were going away from him and suddenly one delivery came in and the stumps went for a cartwheel.

Roston Chase-Shane Dowrich stand: West Indies were crumbling at 71 for 5 but wicketkeeper-batsman Dowrich played sensible cricket along with Chase, who looked comfortable against a probing Pakistan bowling. Both the batsmen began with caution, leaving a lot of deliveries outside off, killing the urge of poke their bat at it.

Chase and Dowrich persisted on using this technique against both Aamer and Abbas for quite a while which eventually led Misbah to change his bowling tactics. Seeing the batsmen not playing anything that went away from them, Misbah got in Yasir Shah who had bowled just an over in the session thus far.

But having played and left too many deliveries from the pacers, Chase and Dowrich looked too comfortable playing against Yasir, who tried bowling wicket-to-wicket offering a lot of flight in the process. But with their concentration, all set, both the batsmen played some glorious drives through the cover region scoring runs. This bowling change helped release the pressure off West Indies which was earlier created by the seamers as they scored 118 runs together.

Wahab Riaz s stunner: Chase decided to go for a maximum against Yasir Shah. The ball went very high and cleared mid-off. Wahab ran backwards facing up eyes on the ball. He then lunged himself with one hand stretched to grab hold of the ball. And while doing so he tumbled towards the boundary rope but stopped well inside.

Late onslaught: Holder and Bishoo smashed Yasir to almost every corner of the park. Yasir was on fire having taken wickets of Chase and Dowrich on consecutive deliveries. But against the run of play, both Holder and Bishoo batsmen decided to go against Yasir scoring runs in boundaries and sixes against him eventually making Misbah take his ace-spinner out of the attack. 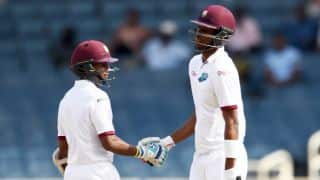