The Royals' skipper feels blessed to have played under the likes of Warne and Dravid.

The Rajasthan Royals skipper Shane Watson, before the start of the seventh edition of the Indian Premier League (IPL), spoke to Derek Abraham of dna about leading an IPL side, learning from the likes of Shane Warne, Australia’s big wins this season and the credibility crisis facing the IPL. Excerpts from an interview…

dna: Congratulations on your appointment as the Royals skipper. What does it mean to you?

Shane Watson (SW): Rajasthan Royals have always had quality leaders like Shane Warne, Rahul Dravid and Paddy Upton. I have never experienced this kind of working relationship in a team. I am lucky to be a part of such an incredible franchise and honoured to be able to have the opportunity of captaining the team. It will help me grow as a cricketer. And I believe I will be able to help cricketers and individuals around me grow as well.

dna: How you do define captaincy? Is it an art or a science?

SW: It’s a good question (pauses). I’d have to say it’s a blend of both. I think there’s a science behind it. There’s a lot of preparation in trying to match up against the opposition (like) having the plans in place leading into the game. But then, a lot of it also comes down to intuition on the day as well — to be able to have a feel of the game and to be able to make a decision from even something that you haven’t thought about previously. However, it just naturally comes out of you. In fact, you just know you have a feeling that this is the right thing to do at the right time and that’s where someone like Shane Warne really showed me that intuition can play a huge part. I’d sit down and talk to him about why he made certain decisions at times, but it’s just his experience that told him it was the right thing to do at the time. Now, I feel that with my experience as an all-rounder, and with great people around me as well, I can do the same.

Virat Kohli is extraordinary with what he’s been able to do because he’s able to adapt to all those different formats and has done it very successfully in the last couple of years as well.

dna: What are the qualities you expect in a skipper? And who’s the best leader you’ve played under and why?

SW: (Laughs) I’m certainly not going to single out any one leader, but I’ve been very lucky to have played under so many incredible captains from Ricky Ponting, who showed me how to get the best out of players and how to interact with players, to Shane Warne who did such an incredible job for the Rajasthan Royals, and Rahul Dravid who also did an amazing job at RR for the last couple of years. That’s just to name a few. I’m unbelievably lucky to have learnt my skills and observed some of the best captains that have ever played the game. Hopefully, I can bring out all the best pieces of those guys and put that across in what I do on and off the field.

dna: Do you think leading an IPL side is as challenging as leading your country? After all, you’ve got to deal with players with different passports, languages and cultures…

SW: There’s no doubt that an IPL franchise provides a few more complexities compared to playing for or captaining your country. But that’s what makes it so exciting. You get to learn about so many different things and interact with so many people that you normally only play against, and don’t really get to know personally. It certainly provides a little bit more of a challenge, but it makes it that much more exciting, because there’s things that you get to learn about for a life experience outweigh any of the complexities that are they because it means you get such a more holistic experience out of playing in the IPL.

dna: Shane, much as we overlook it, the IPL is going through a period of crisis. An institution as mighty as the Supreme Court of India has rapped the BCCI president on the knuckles. And as it stands, a co-owner of your franchise is also under the radar. How does the league get rid of this tag of ‘fixers’ paradise’? And what steps have RR taken to ensure there isn’t another bunch of fixers in the team? Will you take responsibility if your players are caught again?

SW: In the end, we are here to keep the integrity of the game intact from where it first started back in the 1800s and it’s going to continue for a long period of time. So, in the end, whether it’s the players, management and all the people that are involved in cricket, we are here to make sure that if there are any bad apples that are breaking down that integrity of the game, they get found out and moved on to another industry. So, whoever is involved in that, that’s why there are steps and procedures in place to be able to try and make sure that if anyone is there who is not doing the right thing, they are found out and moved on. And there’s no doubt that at Rajasthan Royals, from what we experienced last year, we’re certainly extremely diligent, even more than what we were before, which is nearly impossible because everyone knew what the rules were, everyone knows what the rules are, everyone knows what specific things that you do which do take away from the integrity of the game. So in the end, if there are any players or administrators that come out who have not done the right thing, they need to be found out. And I know there are procedures which help you to try and eradicate that, and that’s only a great thing because they are going to be found out and moved on and that’s only a very good thing for the game because we don’t want those types of people around.

dna: This has been a great season for Australian cricket. Please take us through the emotions associated with an Ashes whitewash. How satisfying was it when you look back at the 0-3 loss your team suffered in England?

SW: Yeah, it’s been a huge 12 months for Australian cricket. From the lows that we had — and I am not even talking about losing 3-0 to England in England. It was more so the Indian Test series and the Champions Trophy that we played in England before the Ashes. There were a lot of issues that were going on in and around our team. And from the time Darren Lehmann took over, he certainly just created a great environment for everyone to be able to have a lot of fun. Even though we lost 3-0 in England, I know everyone who was part of that team looks back with fond memories. We certainly had a lot of fun. We were in positions to win certain games, we just weren’t good enough with certain periods to be able to get across the line. The emotions of being able to win an Ashes series, which I hadn’t been a part of previously, is certainly one of the most satisfying achievements of my Australian career.

dna: By winning in South Africa, Australia bucked the trend of teams winning at home but losing overseas. How tough is it win abroad in an age where T20 rules the roost and ‘pure’ Test players are as rare as an oasis in the Sahara?

SW: It’s very difficult to be able to win a series away from home in general in any format of the game because the conditions can be very foreign. Even though we play a lot of cricket in the sub-continent, for example, which is very different to playing at home, but local teams have a bit more advantage because, under pressure, they know what to go to. So, there’s no doubt that playing in South Africa was a huge achievement for the Australian team but in the end, the conditions in South Africa are not too different from back home in Australia. It’s more so the opposition that you are playing against. South Africa have been the No. 1 team in Test cricket for a quite a while now. They’ve got an incredible team. So, it’s always going to be difficult to beat South Africa, whether it’s home or away. Somewhere like India, where we lost 4-0, those conditions that we played on, I’ve actually never played in those extreme conditions before. So, it does make it very difficult to be able to win away from home, not having that home support as well. But more and more teams are doing it when they are able to play more cricket in those different conditions to be able to adapt as quick as they can.

dna: Does success in the IPL assure you of success at the Test level in the subcontinent?

SW: Well, it hasn’t because I haven’t really scored too many runs in Test cricket in India. The conditions are quite different, there’s no question. The wickets here in the T20 games compared to the conditions that are played in the Test match were very different. In Chennai, for example, the first Test match that we played, the ball was turning quite big on Day One. Whereas, a T20 wicket in Chennai turns a bit, but doesn’t aid extreme turn and bounce. So, there’s no doubt that the conditions were very different. So, no matter how much you want, you think you got an understanding of the conditions when you get to play T20 cricket here, but it’s very different when playing international cricket here.

dna: Why are Test matches getting over in three-four days? Not many batsman seem equipped to fight it out. Is this a direct consequence of T20 which erodes a batsman’s patience?

SW: There’s no doubt that Test cricket is more aggressive than what it was in the past. In the past, people used to bat for really long periods of time. Nowadays people don’t. In certain conditions, at times, it’s an impressive thing to see, but if you got people batting for two days and scoring 50 runs, no one’s going to turn up and watch that with T20 cricket and one-day cricket around as well. There’s no doubt that T20 cricket has meant that you’re probably less patient than what you’d be, but that’s the biggest challenge to be able to try and balance and go in between the different formats, especially from T20 cricket to Test cricket. There’s a huge difference in your mental capacity and concentration. And that’s why someone like Virat Kohli is extraordinary with what he’s been able to do because he’s able to adapt to all those different formats and has done it very successfully in the last couple of years as well.

Virat Kohli-signed bat and ball up for grabs 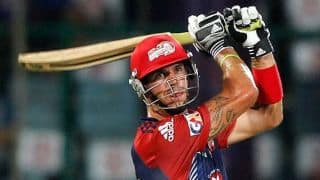