Kerala are set to take on Gujarat in the quarter-finals - after an up and down league stages - starting January 15 at Wayanad.

At the start of the Ranji Trophy 2018-19 season, Kerala skipper Sachin Baby had conceded that this year would be a tough one for his team, as they will be playing among the Elite teams after a quarter-final finish the previous season. And that too after a turmoil-ridden phase ahead of the domestic season that saw teammates rebelling against the skipper.

However, two months later, Baby is a happy man after leading Kerala to yet another quarter-final appearance – second time in a row and second overall in the team s history. With wins over big guns Bengal, Delhi; Andhra and Himachal Pradesh, Kerala are set to take on Gujarat in the quarter-finals, starting January 15 at Wayanad.

But, as Baby foresaw, the road to the knockouts was not easy.

After taking three points in the opener against Hyderabad and claiming wins against Andhra and Bengal, they suffered heavily against Madhya Pradesh – getting bowled out for 63 in the first innings – and then Tamil Nadu, before bouncing back with a bonus point win against Delhi. Loss to Punjab derailed Kerala s momentum and it took a special effort on the final day of the league stages from Baby and Sanju Samson that helped Kerala overcome Himachal Pradesh and advance, on the basis of most outright wins.

The match against Punjab, we knew if we had won we would be on the safer side, but once we lost, we had to rely on results of other teams, Baby tells CricketCountry.com.

So heading into the HP game we had to win and there would be a lot of teams on equal points. We knew most (outright) wins would take the preference and same was the situation for HP as well.

After conceding a slender first-innings lead to HP, Kerala were set a target of 299 on the final day, which they chased down with makeshift opener Vinoop Manoharan scoring 96 off 143 while Baby made 92 off 134 balls and Samson added 61 off just 53 balls.

Once we got to Nadaun, we saw that one side of the pitch was barren and other had grass on it, basically one side spin-friendly, other for pacers; and for us Jalaj was out with an injury, so our expectations were from the pacers, and luckily they did well. They bowled really well and after the first innings, it was a one-innings shoot out, recollects the skipper.

Baby s early apprehensions about the session were set aside when his team won against Bengal – the first meeting between the two sides in Ranji Trophy – and that was the boost Kerala needed.

Against Bengal – it was the first time we were playing them – and with (Sourav) Ganguly as mentor there and big players likes Mohammad Shami, Ashok Dinda, Manoj Tiwary, to beat them at their home was a big confidence booster for us. That win changed the morale of the team. says Baby.

Kerala won by nine wickets at the Eden Gardens with Jalaj Saxena scoring 143 in the first innings and taking two wickets.

Bouncing back, after two losses, in the middle was also crucial for the side.

Before the Delhi game, we lost two consecutive games, and after that there was a lot of criticism that came our way, but we knew we had played good cricket, and with a bonus win against a side like Delhi, that gave us a good chance and that again good confidence.

Jalaj was once again was the star performer, scoring a crucial 68 down the order and claiming nine wickets in the match.

Having Jalaj in the team was a big thing, says Baby about the team s talisman. A player like him is there in every good team. similar to an Hardik Pandya in the Indian team or a Robin Singh. He has the experience and for us opening slot was always a worry, and he has covered it really well.

Jalaj, as usual has been top-notch with the bat and the ball scoring the most runs of the team (479) so far and has 28 wickets at 21.03. In fact, pacers Sandeep Warrier and Basil Thampi have been a revelation this season claiming 31 and 25 wickets, respectively.

As for Baby, he too has been among the runs scoring 455 runs at 37.91 and with what all happened at the start of the season, he believes players rallying around each has been the biggest positive for the team.

Personally, once I get into the field, it is a game of bat and bowl. Off-the-field whatever happened, KCA identified it and that is a thing of past for us now. But, the big thing for me was the team s unity and it has helped us get to the quarters the second time around, beams the skipper.

But, there still a lot of work to be done according to Baby and getting a win against Gujarat – who they lost to in the league stages last season – is now the priority.

We still have to work hard – our batting needs to be more consistent. Spinners, barring Jalaj, have not got us wickets. The pacers have came good for us with Basil, Sandeep and MD Nidheesh having a good season.

Last time we played Gujarat in league game, they gave us a spinning track at Nadiad. But we also did well. It was a close game and despite conceding the lead, we fought back well. So we know what to expect from them and this year, hopefully, we can take the win and move in to the semi-finals, he adds.

Jalaj, who missed the last game owing to an ankle injury is expected to be back in the XI for the Gujarat game. 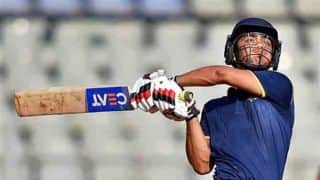