The first Test between India and England begins from November 9 at Rajkot.

India announced their 15-member squad for the first couple of Tests against England on Wednesday. India began their long home Test season with a 3-0 whitewash against New Zealand. Their limited-overs team too did not disappoint as they won the series against the Black Caps 3-2. The selection was Hardik Pandya in the Test squad was no doubt a huge surprise, but India will have to take a call on the combination they would play in the Test series. One of the major decisions they will have to take is to find a suitable candidate to fit in the No. 6 position. With the inclusion of Karun Nair, presumably in place of the injured Rohit Sharma, gives India an extra option with the bat. With Karun in the side, he will perhaps have to compete with Ravichandran Ashwin and Wriddhiman Saha to bat in that place. FULL CRICKET SCORECARD: India vs England, 1st Test at Rajkot

Ashwin did a commendable job in the Test series in the Caribbean, where batted at No. 6 for the very first time in his career. He notched up 234 runs, which included a couple of centuries. With Ashwin batting at No. 6, Saha was moved to No. 7, but played a couple of pivotal innings against the West Indies, one of which included a maiden Test ton at St Lucia. With Karun Nair in the mix, there is an extra competition for that spot now. Karun Nair has been in brilliant form in this edition of the Ranji Trophy for Karnataka, having already scored 326 runs in three matches at 108.66, which included a superb century against Assam in the last round. India would surely want to cash in on his good form and give him a Test debut.

It will however depend on the combination Virat Kohli wants. He is known to be a big fan of having five bowlers in his side, but in the series against New Zealand, he was however not afraid to move away from his comfort zone and have just four frontline bowlers two fast bowlers and two spinners. Ashwin and Ravindra Jadeja were the two spinners India went with throughout the series, which meant Amit Mishra missed out, despite a good show in the Caribbean. Added to their bowling, the duo can chip in with vital runs as well. Ashwin already has four tons, while Jadeja has scored three triple centuries at First-Class level. Jadeja may not have great numbers with the bat at the international stage, but scored a crucial fifty in the first Test against New Zealand at Kanpur. READ: India team for first 2 Tests vs England: Hardik Pandya, Jayant Yadav surprise inclusions as India eye revenge

But If Kohli decided that he needs an all-rounder, who can bowl seamers, then Pandya will get the nod with India going in with three spinners. With that, there is an outside chance that he might get the No. 6 slot.

But the question remains. Should Ashwin play at no. 6 or bat lower down to make sure runs flow low down the order as well? India s top five is more or less decided. Murali Vijay and Gautam Gambhir to open, Cheteshwar Pujara at 3, Virat Kohli at 4, followed by Ajinkya Rahane. India should ideally go in with a full-fledged batsman at No. 6 and it should be Karun. Ashwin and Saha can bat at Nos. 7 and 8. With Jadeja batting at 9, India will have a lot of depth in their batting. Bit India will be happy with the options they have at their disposal. READ: Hardik Pandya, Jayant Yadav in India squad for first 2 Tests vs England

Ashwin s numbers for someone batting low down the order are quite good.

At the same time, Ashwin has done incredibly well in his limited chances at No. 6.

Ashwin has batted just thrice at No. 6, but one cannot deny that those numbers are quite encouraging and will not be surprising to see him play in that position again in the future. Kohli too will be tempted on playing him there, but may have to give Ashwin the No. 7 or 8 spot to give India a bit more depth, although Ashwin s primary role in this series will be to pick up wickets. He might also be entrusted to open the bowling to put the top-order batsmen under pressure straight away. Batting depth, however will be the key. England too have a squad, where most of the players have First-Class hundreds to their names. If India are to compete with such a quality side, they have to stack themselves with quality players in their team. The deeper India bat, the better chances of them winning the series. READ: Twitterati shocked over Hardik Pandya’s selection in Indian Test side

If Karun bats at No. 6, Saha in all likeliness bat at 8, with Ashwin batting at 6, just like they did in the New Zealand series. But given the way he performed in the Eden Gardens Test against New Zealand, and also is excellent technique with against the short ball, Saha might not be a bad option at 6. However, that still remains highly unlikely.

Nair bats as high as No. 4 for Karnataka in the domestic circuit and has been on the fringes of Test selection for some time now. He was called as a replacement for Vijay for the Sri Lanka tour last year. He was also part of the Indian squad for the final Test against New Zealand. But he has not managed to break into the Test side, although he made his ODI debut in Zimbabwe recently. This series could very well be the series, where Karun begins his Test career, but will have to bat much lower down the order than he is accustomed to. He will know that these are just some of the challenges he has to take up, if he has to survive and make a mark for himself in international cricket.

For now, it seems to be a three horse race for the No. 6 spot. As the series progresses, we may however see a few more names in the reckoning. 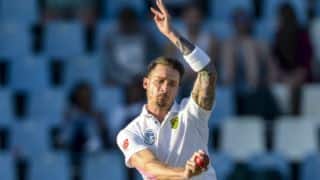