Kohli was visibly distraught with the loss and conceded that RCB can t give any excuses to any further losses.

Nothing seems to be going right for Virat Kohli and Royal Challengers Bangalore (RCB) in this season of the Indian Premier League (IPL 2019) after they lost their sixth match in a row following the four-wicket defeat to Delhi Capitals at Bengaluru on Sunday. (WATCH: Iyer, Rabada hand RCB their sixth straight loss)

Kohli was visibly distraught with the loss and conceded that RCB can t give any excuses to any further losses. The sixth straight defeat has now drastically reduced RCB s hopes of making it to the knockouts. However, former India captain Sunil Gavaskar feels RCB s disastrous outing this edition may actually be a blessing in disguise to Indian cricket. (ALSO READ: We can’t keep giving excuses every game: Virat Kohli)

If RCB don t qualify, as seems likely as of now, then it could well be a blessing in disguise for Indian cricket. Firstly, it will mean a week off for the Indian skipper to recharge his batteries for the ICC World Cup 2019 and from a superstitious point of view, it could mean that all the luck that he didn t have in the IPL has been kept for the World Cup, Gavaskar wrote in his column for MID-DAY on Monday.

Gavaskar slammed RCB s lacklustre bowling attack and feels besides, legspinner Yuzvendra Chahal, none have had the potential to sting the opposition batsmen. It looks like RCB s chances of making it to the knockouts hang by a thread. They will take heart from the Mumbai Indians, who lost their first five game in 2015, but went on to win the trophy. For that to happen, the bowling of Bangalore team has to improve by leaps and bounds, the batting great explained. (ALSO READ: Don’t think scoring 99 in an IPL match can change World Cup selection: Prithvi Shaw)

Frankly, from what has been so far, apart from Yuzvendra Chahal, there doesn t seem to be a Bangalore bowler, who looks capable of bowling good incisive and economical of the four overs that bowlers get to bowl in the format.

Meanwhile, Gavaskar reckons that the selection committee should go in with Hardik Pandya as the fourth seamer. They should look at Vijay Shankar as an extra allrounder. Shankar has missed out a few chances to finish the game getting out at the wrong times which doesn t help, but then that s what most of the other contenders for batting places have been doing too, he wrote. (ALSO READ: Moeen Ali rues poor shot selection after RCB’s sixth straight loss)

The urge to play glamour shots for six and getting caught in the deep and putting their team under pressure has been an unwanted feature so far. This seems more galling when the asking rate is within control and the runs can be got without recourse to the risky aerial shot. It just adds more questions about temperament and how it is affecting some of the batting aspirants. 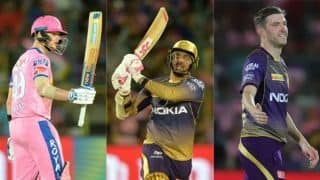