If Cricketers were characters from Game of Thrones.

Lord Eddard ‘Ned’ Stark is an able leader and kind man, respected universally and recognised as one of the most honourable men in all the seven kingdoms. He is loyal to a fault, but will never do anything to bring dishonour on himself or those he loves. Rahul Dravid is perhaps the most honourable cricketer of his era, and is as widely beloved as Ned was. Thankfully his honour is not likely to result in a head on a spike!

Known as the Young Wolf, Robb Stark was The King in the North and led the Northern armies to many great victories. Had he survived the treachery of his own bannermen he may well have conquered King’s Landing. And how different Game of Thrones would have been then! Virat Kohli too is a young warrior who has already led India to same great victories. He too is likely to conquer the world if all goes well.

A silent assassin, almost remorseless in her quest for vengeance, and vastly popular among watchers of the show, Arya Stark is one of the most beloved characters on Game of Thrones. Indian opening batswoman Smriti Mandhana is similarly silent, though perhaps not quite as vengeful.

Jon Snow is young, talented, and destined for greatness (of course he’s not dead, come on!). Joe Root is also young, talented, and seems like he will go down as one of England’s greatest. In addition, Jon is from ‘the North,’ as is the Yorkshire-born Root. Read: Gautam Gambhir, Kumar Sangakkara, Stuart Broad, and other cricketers who should write books

Wide of girth, full of mirth, flowing beard, and a sheer powerhouse, King Robert Baratheon rules the Iron Throne at the start of the series. He is not quite a wise and able ruler, preferring to hunt, drink and frolic away to glory. WG Grace, the father of cricket, resembles King Robert in both girth and facial hair. If anything, The Doctor even surpasses the good king in those departments. One can only imagine how iconic WG would look astride the Iron Throne!

Ser Sandor Clegane, better known as The Hound, was a fearsome warrior and one of the most dangerous men in the Seven Kingdoms. His brute strength made him a terrifying prospect for the opposition. Chris Gayle has as much of a physically imposing presence as The Hound with the brute force to match. As for how scary he is, just ask the opposition bowlers!

Slight of build, frequently underestimated, shrewd and talented — these adjectives could be used to describe either the “half-man,” former Hand of the King Tyrion Lannister, or South Africa’s latest batting sensation Temba Bavuma. Of course, it is unlikely that Bavuma possess Tyrion’s sharp wit and affinity for alcohol, but then who does?

The Lion of Lannister, Ser Jamie is one of the fiercest warriors and most respected swordsmen in Westeros. And yet, for all his grace and might with the sword, he is a much-hated and widely misunderstood character. In other words, he is Kevin Pietersen. Read: Kevin Pietersen vs Severus Snape: Men misunderstood by default!

Daenerys ‘Stormborn’ Targaryen, the First of Her Name, Queen of Meereen, Queen of the Andals and the Rhoynar and the First Men, Lord of the Seven Kingdoms, Protector of the Realm, Khaleesi of the Great Grass Sea, the Unburnt, Mother of Dragons (and possessor of the longest name in the history of the show) is driven, vastly feared, and generally respected. In a short span and at a young age, she has already amassed widespread success. She is feared by her enemies and loved by her allies. Ellyse Perry is as much of a force of nature as Dany, and is one of the best women cricketers in the world, capable of going up against anyone.

A sheer force of nature; an animal; a fierce warrior capable of intimidating the most sure-footed foe; impressive facial hair; massive bulk; don’t know which of the two men we’re talking about? It’s because both Khal Drogo and Merv Hughes tick each box! Though they do not resemble each other physically (Drogo was all muscle while Hughes is…well, more tummy than abs) in terms of personality the two men are almost interchangeable.

The Red Viper of Dorne, Prince Oberyn Martell is a fighter unlike any other. He relies not only on brute strength but agility, almost unheard-of levels of athleticism, and audacious aggression. He is capable of unsettling even the most seasoned veterans. Brendon “Baz” McCullum is equally capable of smashing the opposition with a mixture of quick feet, fearless aggression, and agile movement. He would be able to replicate the efforts of the Red Viper, though Mitchell Starc might be his Mountain.

King Joffrey is a loathsome, reviled, sadistic teenager who every other character on the show despises. Let’s leave it at that. 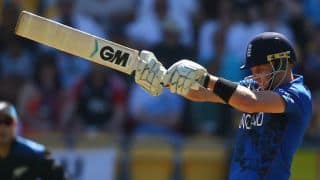