In what should serve as a red alert to all the other seven competing teams in the IPL 2017 that Kolkata Knight Riders (KKR) have attained their peak performance.

In what should serve as a red alert to all the other seven competing teams in the Indian Premier League (IPL) 2017 that Kolkata Knight Riders (KKR) have attained their peak performance. After crushing Royal Challengers Bangalore (RCB) by 82 runs, handing them one of their most embarrassing defeats, KKR turned up to hammer Rising Pune Supergiant (RPS) by 7 wickets. Robin Uthappa and Gautam Gambhir s 158-run stand for the second wicket fired KKR to yet another victory by a huge margin. It also helped KKR topple Mumbai Indians (MI) from the first spot in the IPL 10 points table. Chasing 183 to win, KKR cruised past the target with 11 balls to spare, producing a splendid display of power hitting. Full Cricket Scorecard, Rising Pune Supergiant vs Kolkata Knight Riders, IPL 2017, Match 30

Let us take a look at the highlights:

First to 100: It may have been his 140th match in the IPL, but Gambhir became the first cricketer to have represented Knight Riders in 100 matches. Gambhir used to play for his home side Delhi Daredevils (DD) before he joined KKR back in 2011. Since then both Gambhir as well as Kolkata have grown several folds. Gambhir celebrated his 100th match with a fine half-century, and at the end of the contest, he was back among the most run-getters in this IPL.

KKR s gesture: The attack in Sukma over the Central Reserve Police Force (CRPF) personnel has dominated news ever since it took place. When Kolkata Knight Riders took field Wednesday night, they donned black armbands in the memory of the 25 brave men who were killed mercilessly in what has been one of the deadliest attacks in past several years. Full Cricket Updates, Rising Pune Supergiant vs Kolkata Knight Riders, IPL 2017, Match 30

Men of the Matches miss out: Ben Stokes was not a part of the playing eleven in match No. 30. He sat out due to a sore shoulder. He had produced a fine spell of 4-1-21-2 in the game against Mumbai Indians, and even took a catch at a crucial stage in RPS win. Unfortunately, he could not do anything but watch Pune being handed out a brutal defeat from the sidelines. Faf du Plessis, drafted in as replacement for Stokes, did not get a chance to bat.

On the other hand, KKR opted to rest Nathan Coulter-Nile, Man of the Match in their victory over RCB. Coulter-Nile had sparked the collapse in RCB ranks when they were bowled out for a mere 49.

Rahul Tripathi s consistency: The Maharashtra batsman with a perennially smiling face continued with his rich form, smacking 7 fours to score 38 off 23 balls. Tripathi has done a terrific job for his side in the tournament, but has been unfortunate to have missed out on scoring a few fifties as well including one on Wednesday night. IPL 2017: I have a lot of faith in what I am doing, says Uthappa

Steven Smith loves Pune: With a match-winning century against India on a tricky wicket, followed by 84*, 27 and 51*, it is clear that Smith loves batting in Pune. The RPS captain was among runs once again, top scoring with a rapid half-century which at the end went in vain.

MS Dhoni s ominous form: Rarely has one witnessed Dhoni charging down the wicket right from the onset. That happened today when he meant business, and smashed 2 sixes and 1 four to make 11-ball 23.

The costly drop: Imran Tahir waited in anticipation to break into his familiar celebrations when, batting on 11, Uthappa mistimed a stroke and Jaydev Unadkat came under the ball. However, much to the horror of RPS and Tahir, Unadkat spilled the chance and as it turned out, the dropped catch took the game away from RPS.

Robin Uthappa s onslaught: Uthappa may have been pushed down the line-up, but he has certainly not changed gear. Using sheer power and strong technique, Uthappa played a stunning innings of 47-ball 87, studded with 7 fours and 6 sixes. Uthappa added 158 runs with Gambhir for the second wicket, and their onslaught shut all doors for RPS. The highlight of Uthappa s innings was not just the force with which he played many of his strokes, but also the boundaries he collected behind the wickets playing the ball very late.

RPS disappointment: It was amply clear that RPS would struggle without Stokes, but they did not hope Imran Tahir to be treated the way he was. Tahir gave away 48 runs in 4 overs. The dropped catch of Uthappa by Unadkat sealed the game in KKR s favour. There was another catch dropped, with Gambhir still a few runs short of his fifty. 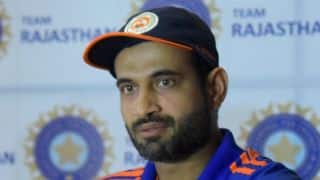