Royal Challengers Bangalore (RCB) have traditionally been underperformers at Indian Premier League (IPL). Despite being consistently among the strongest batting sides of the tournament, they have reached the final on only two occasions, but have never gone the distance. Shiamak Unwalla offers a stats preview for RCB.

To say that RCB have a dangerous batting line-up is a gross understatement. For a side that boasts of the likes of Chris Gayle, Virat Kohli, and AB de Villiers — and last year a resurgent Yuvraj Singh — RCB have done rather poorly. That being said, they still have a formidable batting record; Gayle of course features almost exclusively at the top of each one. Royal Challengers Bangalore (RCB) in IPL 2015 Player Auction: Big purchases show intent from perpetual under-achievers

As mentioned, RCB are among the best batting units in IPL. A quick look at their highest scores proves as much:

RCB have scored over 200 on five occasions, with their top score of 263/5 being the highest in all IPL. IPL 2015 Auction: Full list of players bought by Royal Challengers Bangalore (RCB) for IPL 8

Below are the leading run-scorers for RCB since IPL 1:

Kohli has been a permanent fixture in the RCB line-up since 2008, and therefore leads the list of run-scorers for RCB. He is followed closely by Gayle, who has scored roughly 400 runs less; but Gayle has played less than half the number of games Kohli has for RCB. They are the only men who have scored over 2,000 runs for RCB, while de Villiers and Kallis have scored over 1,000. IPL 2015 Auction: Kings XI Punjab full list of players bought

NOTE: Gayle’s average of 53.45 is by far the highest for any RCB batsman. This after he had a poor season in 2014 in which he averaged far less than 30.

NOTE: Gayle’s strike rate of 157.54 is also the highest for any RCB batsman, followed closely by de Villiers (152.47). Among current RCB batsmen the next highest strike rate is that of Kohli — 123.85.

NOTE: Kohli has the most fifties for an RCB batsman (16) followed closely by Gayle (14) though the latter also has four centuries, thereby making him the batsman with the most 50-plus scores.

In terms of highest scores, Gayle dominates unlike any other, featuring in four of the top five spots on the list, with Manish Pandey being the only other. Below is the list of five highest scores by an RCB batsman:

NOTE: Pandey’s 114 not out against Deccan Chargers in IPL 2009 was the first century by an Indian in the tournament’s history.

NOTE: Gayle’s 175 not out is the highest score in IPL, beating Brendon McCullum’s 158 — incidentally scored against RCB in IPL 1.

NOTE: Gayle’s record of four centuries is the most by any batsman in IPL.

Another record Gayle holds — by a long way — is that of sixes. Below is the table of top five boundary-hitters for RCB:

NOTE: Kohli’s 241 fours is the most by an RCB batsman, while Gayle is second with 177. However, the third on the list is Kallis with 127 fours.  IPL 2015 Auction: Kolkata Knight Riders full list of players bought

It is in the bowling department that RCB have traditionally struggled. A quick look at their top five wicket-takers tells a stark tale:

As seen above, none of the five leading wicket-takers for RCB play for them anymore. Vinay Kumar has gone over to KKR, Zaheer Khan is with DD, while Anil Kumble has retired, and Praveen Kumar and Dale Steyn are with SRH.

With Mitchell Starc — leading wicket-taker and man of the tournament at ICC Cricket World Cup 2015 — to miss out on a few weeks of the IPL 2015, RCB will have a few headaches in terms of the bowling. IPL 2015 Auction: Delhi Daredevils full list of players bought

Below is the list of best figures by an RCB bowler:

Kumble is to RCB’s bowling what Gayle is to their batting. He dominates the best-bowling list with three of the top five spells, each of which came at an economy rate of under five runs an over. His monumental five for five against RR in 2009 signalled a shift in power that saw RCB become a team to watch out for after languishing at the bottom in 2008.

One of the rather surprising features of the RCB bowling is the averages and strike rates:

Sreenath Aravind makes an entry as the man with the best bowling average and strike rate, yet played only two seasons for RCB. On the other hand, Rampaul has excellent numbers but was inexplicably under-played in 2014. He remains the bowler with the highest number of maidens for RCB. IPL 2015 Auction: Full list of players unsold for IPL 8

The fielding of RCB has been by and large quite good. Here is a list of fielders (non-wicketkeepers) with the most catches for RCB:

Kohli has taken by far the most catches by an RCB fielder, though the surprise entry at No. 2 is Vinay Kumar, who has taken more catches than the likes of de Villiers and Mayank Agarwal — an outstanding fielder in his own right. IPL 2015 Auction: Chennai Super Kings full list of players bought

As for wicketkeeping, Mark Boucher and fellow Protean de Villiers head the show:

NOTE: Though there seems to be a discrepancy in the number of games de Villiers has played and his dismissals, it should be noted that he has kept wickets in only 30 of his 60 games.

RCB have had five captains so far, though none of them enjoy an outstanding success rate.

Kohli had captained the team sporadically between 2011 and 2012 before taking over from Vettori as the full-time skipper in 2013. He has led the team in 40 games, and has won 19 while losing 18, and tying two, with one game not yielding a result.

Kumble was the most successful, with 15 of his 26 games resulting in a victory for RCB. He led them to the final in 2009, where they suffered a loss to Deccan Chargers. Vettori’s record is better than Kohli’s in that his win percentage is higher, but both Dravid and Pietersen had terrible records at the helm of the side.

RCB have a talented side, but they are a team that needs to live up to the potential they have displayed all along. A look at their statistics reveals a weak bowling attack, and that is an issue they will look to address this time around. Indian Premier League (IPL) 2015 schedule: IPL 8 match time table with venue details 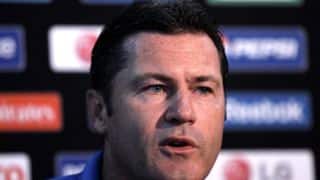