Sairaj Bahutule was born January 6, 1973. Abhishek Mukherjee looks at a Ranji Trophy giant who could never make justice to his talent at the highest level.

July 28, 1990. Seated inside a Maruti Gypsy were three teenagers, driving through Marine Drive in the carefree frolic of youth: they rode speedily until the driver lost control and rammed into a stationary BEST van. They could not really be blamed: for some reason the BEST employees had been repairing the vans without the lights in in the dark.

Vivek Singh, the youth at the wheel, had fractured both hands and the jaw in the crash and was eventually killed. His parents Jagjit and Chitra Singh released an album called Someone Somewhere on December 15 that year with eight heart-wrenching songs dedicated to their son’s memory.

Seated next to him was another friend called Rahul Muzumdar who was also severely injured. A 17-year old Sairaj Vasant Bahutule was in the backseat: the accident had sent him immediately into a coma. He had fractured his right femur and needed to have a steel rod inserted in his leg. His elbow was also crushed.

But Bahutule fought back: “The steel rod inserted into the thigh would pain. It was upsetting, thoughts about rot setting in, being laid up in bed and walking on crutches. But there was no go. I was also thinking of playing again,” he later said in an interview to The Times of India.

By end-1991 he was playing in the Ranji Trophy and continued for two decades as a prolific all-rounder in First-Class cricket: a leg-spinner in the classical mould, he had the ability to run through sides thanks to his ability to turn the ball by a huge distance; also a dependable batsman than it met the eye, he turned out to be one of the Mumbai lower-middle order all-rounders (along with Ajit Agarkar and Ramesh Powar) who contributed significantly to their success.

The international exposure was limited, mostly because his career had coincided with Anil Kumble’s. He performed abysmally in the international opportunities he got, picking up 3 wickets from 2 Tests and 2 more from 8 ODIs. He never took more than a single wicket in an innings. The batting numbers were well below par as well.

Bahutule later said in an interview with DNA: “Anil Kumble was doing very well at that time. Then players, especially the spinners, weren’t persisted with like they are these days. The mindset in that era was different.”

Born in Bombay, Sairaj was the son of Vasant Bahutule, who had played Ranji Trophy for Maharashtra. Vasant was a leg-spinner as well, though both his appearances for Maharashtra were as a specialist wicketkeeper. However, he captained Rajasthan Cricket Club and played for Reserve Bank of India in the Times Shield and for Parmananddas Jivandas Hindu Gymkhana.

Sairaj represented St Xavier’s School and was quite successful — until that fateful match in February 1988 when two boys of Shardashram Vidyamandir — who went by the names of Sachin Tendulkar and Vinod Kambli — mauled the Xaverians and added an unbeaten 664 for the third wicket in a Harris Shield match.

Shardashram declared at 748 for 2 in 120 overs and poor Bahutule finished with figures of 27-0-182-0; the only consoling factor for Bahutule was that he came out at 38 for 3 and remained unbeaten on 69 as Kambli bowled out St Xavier’s for 154.

In a couple of years came the fateful accident. However, he decided to battle it out: he forced himself to join the camp that was a part of the BCA-Mafatlal scheme. The coach Frank Tyson had asked everyone to do a couple of rounds in April, but poor Bahutule could not even make it to 20 metres. He trained hard — for up to nine hours a day — for a month-and-a-half.

Bahutule later said: “I failed in the collegiate game. Even if I ran a little the leg would pain. But there was an under-19 game where I did well. I got the confidence back. And the support of my parents, friends and doctors did the rest.”

The way he fought back to make his Ranji Trophy in December 1991 against Gujarat at Surat was incredible: he was the only spinner of the side (though coming to bowl after Salil Ankola, Abey Kuruvilla, and Raju Kulkarni made things easier): he finished with match figures of 4 for 81.

The next month, against Maharashtra at Wankhede, he walked out to bat at 365 for 6 and scored 111 not out — his maiden hundred — adding 88 with Kambli and 118 with Kulkarni. He played a crucial role in the 1993-94 final against Bengal at Wankhede with 7 wickets and innings of 26 not out and 40.

The first 5-for came in the Irani Trophy next season where he ran through a star-studded Rest of India at home for 193 with figures of 7 for 63. That season he also slammed 112 not out against Gujarat at home. He finished with 393 runs at 49.12 and 39 wickets at 24.56, and was suddenly hailed as one of the leading young spinners.

Breaking through to the international squad was, however, out of the question: Kumble had been wreaking havoc in Tests with able support from Venkatapathy Raju and Rajesh Chauhan; at the same time Narendra Hirwani was trying his best to making a comeback.

The performance that eventually got him a break at the top level was the Irani Trophy show at Wankhede in 1997-98: he scored 71 as Mumbai reached 473 and then took 5 for 79 to bowl out Rest of India for 279. The opposition, however, contained Kumble, whose 7 for 33 restricted the hosts to 93.

Rest of India were set 288 for a win, but Bahutule turned out to be too good for them: if Kumble had 11 wickets in the match, Bahutule had 13 — including a career-best 8 for 71 in the fourth innings. He was the first bowler to pick up 13 wickets in the Irani Trophy (a feat later emulated by Kumble and Murali Kartik).

Mumbai won the match by 54 runs. A little over two months later Bahutule made his debut in the ODI series against Sri Lanka in 1997-98.

The accident had sent Sairaj Bahutule immediately into a coma. He had fractured his right femur and needed to have a steel rod inserted in his leg. His elbow was also crushed

Bahutule returned decent figures of 9-0-33-0 at Guwahati but did not get a bowl as the Indore ODI was abandoned after 3 overs of play. India lost the third ODI at Margao but Bahutule picked up his first international wicket when he clean bowled Roshan Mahanama.

He played 4 ODIs in the Independence Cup in Bangladesh but picked up a single wicket when he had Saeed Anwar caught by Sourav Ganguly in the first final. India lost the second final, and Bahutule was dropped for the third (where India pulled off a record chase masterminded by Ganguly and Robin Singh).

Bahutule was dropped from the side, but fought hard at domestic level, slowly clawing his way back. He claimed a hat-trick in the Duleep Trophy match against East Zone at Pune in 2000-01. As East Zone lost 20 wickets on Day Three, Bahutule removed Sanjay Raul, Sukhvinder Singh, and Pinninti Jayachandra in successive deliveries and finished with 6 for 49.

When Steve Waugh’s record-breaking Australians toured India, Bahutule bowled brilliantly in the tour match for Mumbai at Brabourne Stadium: he removed Michael Slater, Justin Langer, Ricky Ponting, and Adam Gilchrist in the fourth innings as the world champions finished on 141 for 6 chasing 317.

The performance against the tourists helped, as did Kumble’s injury and the failure of Harbhajan’s support spinners (Rahul Sanghvi and Raju) throughout the series. With the iconic series levelled 1-1, Bahutule was picked for the third Test at Chennai.

The historic Test at Chennai was decided by Harbhajan’s 15-wicket haul, a Tendulkar hundred, two dazzling VVS Laxman fifties, and a match-deciding cameo from debutant Sameer Dighe. Bahutule, however, played his part, removing Mark Waugh in the first innings and Langer in the second. He also scored a 58-ball 21 not out in India’s first innings.

Bahutule did not get to play a Test on the Zimbabwe tour (he failed in his only tour match against CFX Academy at Harare), but was selected for the third Test at SSC on the Sri Lankan tour, once again with the series levelled 1-1. This time he fared worse, trapping Mahela Jayawardene leg-before after the batsman had scored 139. Muttiah Muralitharan led Sri Lanka to an innings victory, and Bahutule never played another Test.

Thanks to Kumble’s injury, Bahutule made one final international comeback in a TVS Cup match of 2003-04 against New Zealand at Barabati Stadium. He was clobbered by Craig McMillan and had to be taken off after figures of none for 24 in 3 overs as the tourists romped to a four-wicket victory. He was dropped from international cricket for good.

Back home, Bahutule led Mumbai to the Ranji Trophy title: he returned figures of 4 for 42 and 6 for 53 in the semi final at Wankhede; he also scored 92 and picked up 5 more wickets in the final at Chepauk. He was still in the contention for national selection when South Africa toured India later that year, picking up 6 out of 13 wickets to fall for Board President’s XI at Jaipur.

However, the presence of Kumble and Harbhajan, combined with the occasional appearance of Murali Kartik, meant that Bahutule had to remain content with his appearances in domestic cricket.

Bahutule moved to Maharashtra, his father’s team in 2005-06 after a financial dispute of sorts with Mumbai Cricket Association (MCA). Being the leading bowler of the side (he also often batted in the top five) probably helped him to have another shot at the national side. He pulled off almost a fairytale performance, scoring 45 not out and 26 and picking up four for 59 in Maharashtra’s upset win over Mumbai at Wankhede in 2005-06.

After two seasons he came back to Mumbai, but by then his form was on the wane: despite Mumbai’s Ranji triumph, Bahutule picked up only 9 wickets from 7 matches that season: he shifted to Assam next season when he got an offer. The next season saw him turn up for Andhra before he got an offer to captain Vidarbha in 2010-11.

In his last First-Class match for Vidarbha against Delhi at Nagpur, Bahutule scored 17 and a duck and went wicketless. He announced his retirement after the match, on New Year’s Day, 2013. “I have no regrets. I played well in every season. In future I will stay connected to cricketing activities,” he said in the press-conference while announcing his retirement. Bahutule had, however, regretted for not being a part of IPL.

Keen to coach Mumbai, Bahutule was appointed the coach of Vidarbha for the Vijay Hazare and Mushtaq Ali Trophies last season. As a part of BCCI’s magnanimous One-Time Benefit Scheme, Bahutule was awarded INR 3.5 million in September 2013. 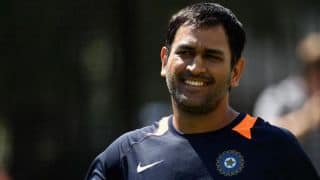