Dan Lawrence may well be the next young England batsman to watch out for.

Daniel Lawrence stroked his way to a classy 161 at The Oval as Essex piled up runs against Surrey in the County Championship. Arunabha Sengupta writes that the youngster has class enough to be England’s next batting hope.

He won’t be able to celebrate it with the mates of his school-year. The drinking rules of United Kingdom stipulate that a 17-year-old has to be accompanied by an adult to down a drink. READ: James Taylor to lead England against Ireland

But, Daniel Lawrence should not have a problem with that. There will be many of his county team who will gladly drink to a long, long, flourishing career. Even Kevin Pietersen, who spent most of the day in the outfield chasing the glorious drives from the young man’s amazingly tempered blade, would not be unwilling to split a beer with him — if the way the senior pro approached Lawrence after his innings to shake his hand is anything to go by. READ: Kevin Pietersen prefers Metro over Ferrari

With the General Elections the hot topic of the day, most of the members who had braved the chilly April wind to trot down to The Oval huddled in the Long Room, reading the political news round up as they waited for the likes of Kumar Sangakkara and Kevin Pietersen to bat in the second innings. However, they had to wait long, and, with time, most of them did not mind. They were absorbed in watching the visiting youngster — someone who will not be voting this time.

As the Essex innings went on and on, the youth of the season was marked by the temperamental gusts of near-freezing wind as the teasing clouds kept tucking the warmth of the sun away from the sparse and heavily over-coated crowd. The summer is still in the works in England. But, as far as the youthful batsman was concerned, there was nothing half-baked about him. His game seems fine tuned to perfection that belies his years.

Playing just his second First-Class game, Lawrence looked full of class as he struck 17 fours, and two sixes off left-arm spinner Zafar Ansari, in a sparkling 161 made from 206 balls. The previous evening he had shown plenty of panache and pluck as he had stroked his way to 48 not out. This day, his batting unfurled like a fresh and fascinating flower of the summer. When he drove Ansari to the cover boundary in the second hour, he became the third-youngest centurion in county cricket. Godfrey Bryan of Kent in 1920 and Dipak Patel of Worcestershire in 1976 had been younger, by just a few days, when they had hit their respective maiden hundreds.

Throughout the innings, the head remained steady and still and the stride forward confident and composed as he drove with fluency and elegance. Some of the straight drives off Matt Dunn and Tom Curran winning heart-felt applause from the Surrey supporters. The superb way he paced the innings was also a feature of his batting. With Essex consolidating their lead, Lawrence lofted Ansari for two splendid straight sixes as he added 121 runs with the inimitable Jesse Ryder in just 21 overs in the morning session. There was no hint of a slog.

True, the Surrey attack is not the best in the world, and with Jade Dernbach off the field with an injury, the task was made even easier. But, the temperament mixed with the polished technique did mark the young man as one of the big hopes of English cricket. The stint in Australia last winter seems to have rounded his game and added quite a bit of additional edge to his Chingford experience.

It was finally an attempted late cut off Ansari that ended his innings, or he had looked well on the way to overhauling WG Grace’s nearly 150-year-old record of being the youngest English First-Class double centurion.

Later in the day, he showed exemplary keenness in the field when Surrey began their second innings as he ran out Ansari with a direct hit.

With Joe Root and Gary Ballance already major forces to reckon with in world cricket, Lawrence may well be the next young England batsman to watch out for. 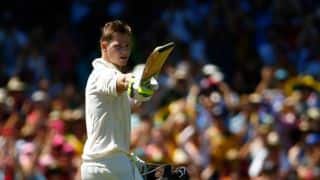 Steven Smith: England will not even come close to winning the Ashes 2015