While Australia went on to claim their second consecutive Champion Trophy victory, it was Shane Watson's innings that ensured the team faces no hurdle and reach smoothly to the final. It was the ton against England, their arch-rivals, in the semi-final.

Shane Watson, one of the most talented modern day all-rounder, has been a match-winner for Australia for a long time. Watson has 9 ODI centuries to his name; needless to say, all of them reflect the talent the player had. Even then, if you had to pick one, there is one century that has to be special for the player, for the circumstances it came in. While Australia went on to claim their second consecutive ICC Champions Trophy victory, it was this innings that ensured the team faces no hurdle and reach smoothly to the final. It was the ton against England, their arch-rivals, in the semi-final. READ: Happy Birthday, Shane Watson! Former Australian cricketer turns 35

Being reigning champions meant there was already pressure on Ricky Ponting‘s shoulders. It was a strong outfit, with Ponting himself enjoying a very good form, scoring runs consistently. Cameron White could blast runs from any positions. Michael Clarke ruled the middle-order along with Michael Hussey. Australia looked unstoppable after thrashing England 6-1 in the Natwest Series. All eyes were on Watson, who had emerged as the highest run-getter in the series against Pakistan, but lost his way en route Natwest Trophy.

In the Natwest 2009, all Watson had done with the bat was a total of 153 in 7 ODIs. His performance with ball remained good, as he emerged as the second highest-wicket-taker of the series after Brett Lee. But his primary responsibility of giving Australia the starts remained unattended. Then came a phase that batsmen often dread of — a string of ducks. In the penultimate match of Natwest Series, he scored a 9-ball 4, but he did not know that he will take another four matches to score the next run of his ODI career.

Australia started their Champions Trophy 2009 quest against West Indies at New Wanderers, Johannesburg. Despite half-centuries from Andre Fletcher and Travis Dowlin, West Indies skittled for 225 chasing Australia’s 275. Though the start was positive, Australia had many things going wrong. Ponting was scoring as usual, Tim Paine made a decent contribution with 33 but the entire middle-order failed. However, Mitchell Johnson pulled off an astounding 66-ball 73 making him the obvious choice for the Man of the Match award. But Watson failed to get any runs, his only contribution being 2 wickets.

The next team they were up against was India at Centurion. Australia looked more settled than their previous appearance. The entire batting line-up contributed to a total of 234 in 42.3 overs. Paine, Ponting and Hussey all scored half-centuries while White was batting on 35 when heavy rains compelled the match to be called off. Watson failed to make out anything of the match, being out for a duck.

At the same venue, Australia’s next game was against Pakistan. A combined attack from the Lee-Johnson-Watson trio restricted Pakistan at 205, with big names like Shahid Afridi, Shoaib Malik and Younis Khan failing to pull off any heroics. Pakistan’s bowling also looked impressive as they reduced Australia to 59 for 2. Hussey’s standout 64 amidst the thirty-ish scores of the top-order snatched the match out of Pakistan’s jaw. The positive that Punter could take from the match was Shane Watson’s 24, as he had scored for the first time in the series.

A big game was awaiting Australia — the semi-final. Australia were up against England, and Andrew Strauss had his chance to get sweet revenge of the humiliation defeat of Natwest 2009. Australia, however, got the perfect start at Wanderers, reducing 6 for 101. Ironically, Tim Bresnan did a Johnson, scoring 80 off  76 coming out at No. 8 and pushed England’s score to 257 in 47.4 overs. Peter Siddle bagged 3 wickets while Watson equaled Lee with 2, but he was yet to prove his worth with the bat.

Graham Onions got the first breakthrough, dismissing Paine in the very second over of Australia’s innings. Another disappointing effort with bat looked on the cards. Watson’s innings, however, was different from the start. Unlike his previous failures, he looked way more composed. Instead of throwing in everything to make contact, Watson seemed to gain control of the situation: he knew that after an early wicket, Australia needed him to anchor his innings.

Ducking a couple of deliveries, Watson went off the mark with a single. His first boundary showed his class as it looked to be clean and confident, running through mid-on. He mostly barked on singles, getting gradually into the game, sorting carefully the loose balls to punish the bowlers. His half-century came off 69 deliveries and had just 4 boundaries and a six.

Having established a good partnership with Ponting, it was time for Watson to cut loose. He picked up the pace at the right time. The next fifty came off 47 deliveries, and Watson completed his hundred, the second of his ODI career. But this was way sweeter and was more pleasing, for it came after a long drought of runs. Ponting’s support from the other end was exceptional, and Australia overhauled the target with 8.1 overs remaining.

Ponting remained unbeaten at 111, but Watson’s 136 got him the Man of the Match award. Buoyed by the victory, Australia went on to lift the Champions Trophy. 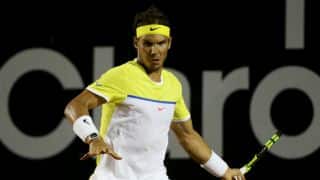 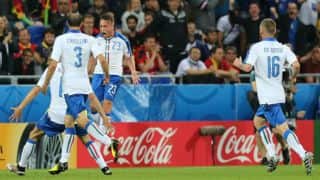