South Africa went down fighting as they lost a thrilling ICC Cricket World Cup 2015 semi-final to New Zealand by four wickets at Eden Park. Devarchit Varma says why South Africa can return home with heads held high, despite their dream being shattered.

It happens all the time in football. The boys, and the men; they all weep. After a closely-contested game, tears roll down their eyes when they give it all but end up losing. Weeping is a sight common in the game of football, but not in cricket. It will be daft to debate which sport — cricket or football — is emotionally more sapping. But for sure, sports do bring everything out from sportsmen, and you never know till the time they break down that they had actually breached the tipping point. Full Scorecard: New Zealand vs South Africa, ICC Cricket World Cup 2015 Semi-Final 1

AB de Villiers and his men failed to keep a check on their emotions as they broke down immediately after losing their semi-final to New Zealand. After all, there was nothing left which they could have done to win the contest, and their tears proved that they had given it all. Maybe, some other day will belong to them. Sometimes, wins are like walks in the park for the best of the teams, sometimes they are on a roll and sometimes they keep pulling off favourable results out of adversities. But sometimes, even the best of the preparations and efforts from the best of the teams fall short of the finish line. That is when the men and the boys break down. Irrespective of their tough characters, irrespective of the size of their hearts, irrespective of them knowing the only two possible outcomes: they will either win or lose. READ: New Zealand vs South Africa ICC Cricket World Cup 2015 Semi-Final: SA innings highlights

Couple of months from now, or may be couple of years, when we will look back at the first semi-final of ICC Cricket World Cup 2015, it would be conceded that maybe New Zealand were the better team of the two. As time will pass, memories will fade. And among them could possibly be the images of the big men from South Africa breaking down the moment the ball hit by Grant Elliott sailed past the boundary ropes of Auckland’s Eden Park. The cruel scorecard of the match will only tell how brilliant both the teams were and how closely the game was fought — but it will never tell the tale of a nation’s dream being shattered and the emotional turmoil that followed. Updates: New Zealand vs South Africa, ICC Cricket World Cup 2015 Semi-Final 1

South Africa were the only team that got a ceremonial send-off from a vast sea of fans and supporters as they embarked on a dream to lift the World Cup. It was the dream that all of South Africa lived in; it was the belief that would see the dream turning into reality. But with the loss to New Zealand in the semi-final, it stands shattered. And so does the belief. How cruel can the game of cricket be? READ: Corey Anderson and I planned innings to perfection, during New Zealand vs South Africa semi-final

There was nothing else left which de Villiers and his men could have done. They did not look very convincing, but that does not tell the entire story. A package comprises of many small and big factors coming together, and South Africa believed they had got it right. It looked like they had got it right! Unfortunately, a little bit of fumble and it all went away from their hands, New Zealand prevailed and South African men were left with nothing but tears.

South African cricketers can return home with their heads held high, and keeping up the spirit they have shown in this tournament, there should at least be a warm reception. De Villiers hoped after the win that people back home should be proud of his team, and there is not even an iota of doubt that there would be anyone who would not be proud of these cricketers.

There cannot be a true cricket fan who would not feel the pain that is there in de Villiers’s heart — after all he is the leader of these men, the one who is also supposed to lift them up every time they fall. Who will lift de Villiers, who can be at his side in these troubled times, now that the entire squad would be broken? 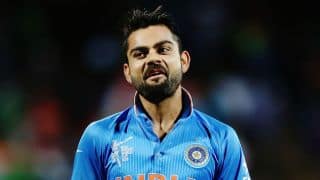