India have never won any match on Virat Kohli s captaincy debut in any format.

The first T20I of the three-match series between India and England at Green Park, Kanpur was totally dominated by the Eoin Morgan s men against Virat Kohli and his co. After restricting India to 147 for 7, English batsman got off a good start before openers Jason Roy and Sam Billings both were dismissed in the fourth over by leg-spinner Yuzvendra Chahal. Captain Morgan then took charge along with Joe Root, and anchored the innings with their 83-run partnership. Morgan scored his 8th T20I fifty, while Root remained unbeaten on 46 as England won the contest comfortably by seven wickets. With this exciting contest, we present some interesting numbers for the match.

Kohli became the 1st Indian captain to lose T20I on captaincy debut. Dhoni s debut T20I captain was against Scotland which was washed out because after toss. Kohli also became 5th captain to lead in T20Is after Virender Sehwag, MS Dhoni, Suresh Raina and Ajinkya Rahane.

Chahal became the 2nd Indian to bowl both opposing team openers in a T20I. The first was S Sreesanth, who bowled Adam Gilchrist and Matthew Hayden in the 2007 World T20 semi-final.

India s 147 for 7 is their second-lowest total against England. The lowest remains 120 for 9 at Kolkata in 2011-12, which is also their lowest against any team without getting all out.

Dhoni s unbeaten knock of 36 is his 5th unbeaten innings against England most by any batsman in T20Is against them. Dhoni went past Dwayne Bravo, Jacques Kallis and Andre Russell.

This was the 3rd time India batted more 20 overs but hit only one six (Raina hit the six today). The other two occasions were against England in the 2012 World T20 (Rohit hit the six) and against Zimbabwe at Harare in 2015 (Murali Vijay).

This was the first match of this tour where Root and Roy did not get to score fifty. This was the 8th match for Root in this tour and has registered 6 fifties and a hundred. On the other hand, Roy made 3 fifties from 4 matches.

Morgan became the 1st English batsman to touch 1,500-run mark in T20Is and 12th overall. His knock of 51 is also his 8th fifty, the most by an English batsman in T20Is. He went past Alex Hales and Kevin Pietersen.

This was the third time England used only five bowlers against India to bowl their full quota of overs. The last two occasions both came in 2012-13, in Premadasa (World T20) and Wankhede.

This was the second time in his 21-T20I career that Adil Rashid did not bowl. The other occasion was in 2015-16, against Pakistan at Dubai.

Playing in his 2nd ODI, Tymal Mills picked up his first T20I wicket, that of Hardik Pandya.

Bumrah batted at No. 9 today. This was the first time he batted at anywhere above No. 11 in international cricket.

The Indian seamers bowled 49 balls between themselves without taking a wicket. This is the most Indian seamers have bowled and yet have gone wicketless. The previous record was 36 balls, against West Indies at Mirpur in the 2014 World T20. This is also the fifth time that Indian seamers have achieved this , including a match against Scotland where not a single ball was bowled. 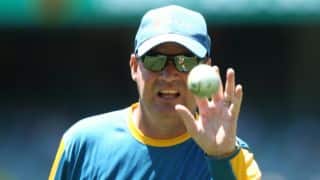 Mickey Arthur: Pakistan are still a fledgling ODI side 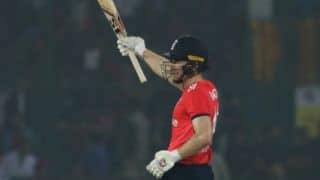