There are some bright spots that still linger over what seems to be a bleak future for the left-hander.

Yuvraj Singh’s nightmarish innings in the World T20I 2014 final may have dealt a cruel blow to his career. However, Arunabha Sengupta looks at some bright spots that still linger, what seems to be a bleak future for the left-hander.

It was a 21-ball nightmare. Every moment of the glacial knock sucked the life out of the Indian innings, nullifying the tremendous work done at the other end by Virat Kohli. One of the hardest hitters of the cricket ball pushed, prodded and poked for a horrifying half-hour before chipping a full toss down the throat of long-off.

The Sri Lankan strategy was superlative, the plan executed to perfection by every bowler. Yet, it was more than evident that Yuvraj Singh was woefully out of touch. The man who had brought sparked off enthusiasm for the format by hitting Stuart Broad for six sixes in the first edition of the tournament now seemed a sad, stagnant, shadow of himself. Not only did was his innings was one of the major reasons for the less than ordinary score put up by India, it was essayed under the merciless glaring spotlight of the World Cup final, with millions glued to every moment of the game.

The man who had come good at every crucial juncture during the triumphs of World T20I 2007 and the World Cup 2011 could not have chosen a worse moment to fail. The stigma will follow him for long. The match-winning player that he has been, he will not forget in a hurry that the loss in the finals had a lot to do with his failure to force the pace — to be precise, his inability to middle anything at all.

It has nothing to do with that group of worthless, idiotic morons pelting stones at his Chandigarh house and returning with the self-satisfied smugness of the archetypal Indian ‘cricket lover’. A man who engineered those breath-taking moments of 2007 and 2011 will always be pained by his failure at this pivotal moment. He will very well understand that his name will forever remain associated with the defeat. International sports can be cruel.

However, if we step away from all the sound and subsequent fury and look at the situation objectively,what can we infer about the career of this stalwart performer? Has the painstaking innings ended his days as an Indian cricketer?

Bleak but with a silver lining

It is true that Yuvraj is a fighter to the core. I need not repeat that he performed his dazzling feats during the 2011 World Cup when the deadly cancer was spreading through his system. He suffered bouts of vomiting, then attributed to the tension built around the tournament, and yet came out to deliver the goods again and again.

However, after his victorious battle with cancer and his memorable return against New Zealand in September 2012, the figures are not too flattering. If we look at some numbers the picture painted is indeed bleak – but there are aspects that hint that not all may be over for the man. He has been in and out of the One Day side, managing just two fifties in 19 matches, and scoring at an average of 18.53.

He has never quite been a regular Test player, and the three matches for India in the longest format have had characteristically fluctuating and non-flattering results.

It is his strike rate that is mind-boggling at 135.93 — which is the best of India during this period, ahead of Kohli’s 131.45. Viewed in this context, the innings in the final seems quite bizarre. To underline his normal speed of scoring, let me add that he has hit 25 sixes in T20Is since his return in September 2012. The closest in the Indian team is again Kohli with 16.

There have been 13 half-centuries hit by Indian batsmen since September 2012 in the 17 matches. The amazing Kohli has scored seven of them. The other six are shared equally between Rohit and Yuvraj. It is not for nothing that the team management sent him in at No 4 throughout the tournament. Because if Yuvraj gets going the match can be won in the course of a few balls.

So, perhaps there is a lot of sense in the words that one heard from Sachin Tendulkar. After the angry reactions around the country in the aftermath of the final, the legend came out saying, “Last evening, Yuvi had a tough day and he can be criticized. But he should not be crucified nor should he be written off. I have been an admirer of Yuvi’s indomitable Spirit which has overcome many challenges, both on and off the field. Knowing Yuvi’s determination and ability to fight adversities, he will emerge stronger, proving his critics wrong, yet again.”

Yuvraj’s ODI career indeed does seem to be in shambles, and after the traumatic innings in the final his place in the World Cup squad for 2015 may be in jeopardy. He may still make it, but only if he gets sufficient opportunities and grabs them with both hands.But, at the same time,it seems too early yet to write him off in T20I.

Yuvraj has battled naysayers and rejuvenated his career earlier. When he had struggled for a while after his promising first days, Geoff Boycott had been one of the many who had found his technique too flawed to make an impression on international cricket. Yuvraj had responded bybecoming one of the foremost ODI stars of India. And then he had taken on the decree of death and managed to vanquish him as well. He is just 32, and that includes a new lease of life. He may have it in him to surprise us with another turnaround. 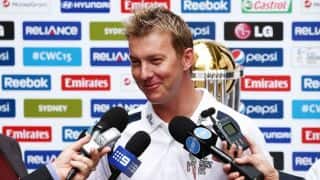