Sarfaraz is more often poked by his imminent peers in the RCB dug-out for his young age and rotund physique.

The eighth edition of Indian Premier League (IPL) was a festival indeed. It saw some great cricketing moments from disciplines of batting, bowling and fielding. It had its share of controversies and of course the rib tickling moments.

Abhishek Kumar and Suraj Choudhari lists down 9 most memorable funny moments from this season’s IPL.

You always expect something unique from Dhawan. The Sunrisers Hyderabad (SRH) cricketer is a true character and once again showed that after completing a very good catch of his Test opening partner Murali Vijay. Dhawan celebrated the Kings XI Punjab (KXIP) batsman’s dismissal ‘kushti’ style by slapping his thighs and twirling his moustaches.

The Royal Challengers Bangalore (RCB) and Delhi Daredevils (DD) encounter promised to be an exciting one but unfortunately the rain marred the Bangalore game. The only entertainment point during the RCB innings came when the players were leaving the field after the skies opened. DD’s Yuvraj tried to play a prank on RCB’s Chris Gayle and in return, the Jamaican giant chased the former with a raised bat. It seemed as if someone pulled the tail of a bull. Was hilarious!

Pollard is a whimsical cricketer. He amused all with his amazing little act with David Warner in the 2014 season of the IPL, where he denied receiving a flying kiss from the SRH player. In a game against RCB, this time Pollard taped his mouth when he was asked to shut up by the umpire for sledging Gayle. The act wasn’t well received but nevertheless it was funny to see a cricketer fielding with his mouth taped literally.

4 – Gayle, Mandeep and Kohli perform ‘bhangra’ in the dressing room

RCB had just pulled off a fantastic win over Kolkata Knight Riders (KKR) in a rain affected tie and now it was time to celebrate. No one celebrates like the Bangalore side and you expect the north Indians in the team to get in the act of Bhangra but ever imagined a Caribbean cricketer doing the same? With Gayle, you expect anything. The trio of Gayle, Virat Kohli and Mandeep Singh took party to their room performing Bhangra.

KXIP were pretty ordinary in the field this season but they have some of the most likeable characters in the side. The team didn’t lose their spirit and entertained the fans off the field with superb Dubmash performances. Glenn Maxwell, George Bailey, Axar Patel and Gurkeerat Singh Maan can surely think of an alternate parallel career.

Prankster Dhawan was at it again. And this time the victim was his little son Zoravar. The SRH lefthander decided got his son for the team’s victory celebration against Rajasthan Royals (RR). After cutting the cake, Dhawan decided to give Zoravar a cake facial.

Chennai Super Kings’ (CSK) Dwayne Bravo made the headlines during the tournament with the launch of his singles track ‘Chalo Chalo’. Bravo’s singing and dancing made quite a news and his teammates – Ravindra Jadeja and Suresh Raina decided to imitate the nifty moves. The duo expressed their elation of making it to the final by dancing to the Bravo’s ‘Chalo Chalo’ in their hotel room.

8 – Teenager Sarfaraz Khan reveals he has a ‘boyfriend’!

Sarfaraz is more often poked by his imminent peers in the RCB dug-out for his young age and rotund physique. When the RCB insider, Mr Nags, in a friendly conversation asked Sarfaraz who is his best friend and boyfriend? He innocently replied Ashok Dinda and killed the show. Although he didn’t get the idea behind the question but his reply was enough to get the viewers laughing on the floor.

Sarfaraz’s teammates loved trolling him as he is the youngest member of the squad. He has a keen appetite for food and runs too. In a team dinner after the match, Gayle calls him ‘Panda’ as he compares Sarfaraz with the legendary character of ‘Kung Fu Panda’ who is famous for his hunger for food and success too.

More from these writers:

Mumbai Indians celebrate their domination in the IPL at Wankhede Stadium 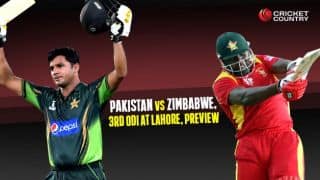