The third and the final Twenty20 (T20) of the Cricket All-Stars Series witnessed a dramatic climax as the momentum of the game kept shifting like a pendulum of a clock.

The third and the final Twenty20 (T20) of the Cricket All-Stars Series witnessed a dramatic climax as the momentum of the game kept shifting like a pendulum of a clock. Warne’s Warriors whitewashed Sachin’s Blasters as they won the final game by four wickets. The fans that turned up at the Dodgers stadium got full value for their money as the game looked evenly poised till the final over.

Blasters won the toss and elected to bat first, they got off to a flying start as both their openers Sachin Tendulkar and Virender Sehwag came out all guns blazing. Tendulkar played a scintillating knock and scored a quick fire fifty from just 27 deliveries. Mahela Jayawardene too contributed well with his cameo of 41. Sourav Ganguly was a bit slow but made up for it by slamming a fifty from just 37 deliveries.

Carl Hooper too contributed for a priceless 33 as Blasters posted a massive 219 in their 20 over’s. Daniel Vettori was once again pleasing to watch as he was among the wickets and bowled with immense confidence.  Jacques Kallis was economical as he gave away just 17 runs from his three overs.

Chasing 220, Warriors got off to a shaky start as Blasters drew the early blood when Michael Vaughan was dismissed on the very first delivery of their innings. Andrew Symonds started off with some early attacks and provided some momentum. Kumar Sangakkara, Ricky Ponting and Kallis were instrumental as the troika of these three snatched an implausible victory from the jaws of defeat. Sangakkara and Ponting scored 42 and 43 runs respectively.

Kallis’ knock of 47 ensured the game was dragged till the last over. With three runs required more to win Kallis got out in the final over further creating a lot of drama. Shane Warne walked in who didn’t have a good day with the ball and sealed the game with a massive hit over mid-wicket. Blasters didn’t have the bowling to restrict the star explosive batting line-up of Warriors.

Turning point: The ball was comfortably in Blasters court till the end of 17th over, when Warriors needed more 57 runs from 18 deliveries. The 18th and the 19th over which was bowled by Curtly Ambrose and Glenn McGrath conceded 26 and 23 runs respectively. These two over’s accounted for 49 runs and turned the game on its head. 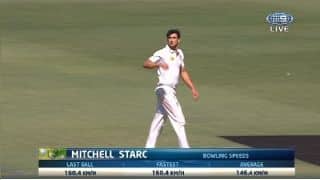 Mitchell Starc's 160.4 kmph delivery makes him one of the fastest bowlers in Test cricket 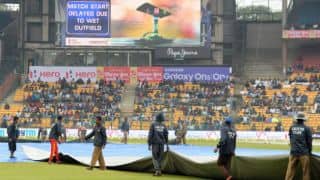 India vs South Africa 2015 2nd Test at Bengaluru, Day 2: Play called off due to persistent rain