The 21st century has witnessed eight Ashes series so far with England and Australia both winning four apiece, however when we talk about the Tests played, Australia clearly hold the upper hand.

The 21st century has witnessed eight Ashes series so far with England and Australia both winning four apiece, however when we talk about the Tests played, Australia clearly hold the upper hand. Twice – in 2006-07 and 2013-14, they have whitewashed the English side. Out of the 40 Tests played in this century, Australia have won 21, lost 12 and seven have ended in a draw. As individual performers, the Aussies have fared far better. After England’s Ashes XI of this century, Suvajit Mustafi now lists out Australian Ashes XI of the 21st century.

He wasn’t the dasher in the side that possessed some of the greatest stroke-makers of all-time, yet Langer was a warrior and most importantly an effective one. Post 2000, Langer played in 16 Ashes Test, scored 1222 runs at 50.91 with four centuries. Langer, solid as rock at the top, has been extremely consistent in all the Ashes series he has played and is an automatic choice in this side.

From his 20 Ashes Test in this century, Hayden scored 1461 runs at 45.65. If you thought those numbers are impressive, they are not when you compare it to his career average. Hayden has been one of the greatest batsmen in this century and he makes it to the side ahead of David Warner. Hayden was one of Australian heroes from the 2002-03 Ashes win where he scored three hundreds.

No player has scored more runs in Ashes in this century than Ponting. The former Australian captain may have lost three Ashes series, but is still the vice-captain of the side for his immense experience. He has played 29 Ashes Tests post 2000 and has scored 2188 runs at 46.55 notching up seven tons.

The current Australian skipper is set to eclipse his predecessor [Ponting] as the highest run-getter in Ashes in 21st century. From 30 Tests, Clarke averages close to 45 and the men who compete for his spot are — the elegant Mark Waugh and the destructive Andrew Symonds. Mark averages 86 with the bat, while Symonds 58. However both of them have played five and three Ashes Tests respectively in this century.

When you have Ponting as the deputy, it has to be someone special leading the side. Steve is an automatic choice.  In this century, he has led Australia to two Ashes win and has been impressive with the bat. In the nine Tests that he played, he scored 626 runs at 56.90, notching up three centuries. His 102 in Sydney in January 2003 exemplified his grit. Though Steve didn’t bowl enough towards the end of his career, he can also roll his arms if required. But the side has enough fire power in their bowling to demolish the best in the world.

Hussey should have probably played more Tests in his career, but thanks to the world-beating line-up the Aussies had, he couldn’t break into it. However, he made it count in the ones he played. He has a healthy average of 59.27 from the 15 Tests he has played, and scored four hundreds. His 61 and 116 at his home ground in Perth in December 2010 helped Australia win their solitary Test in the Ashes 2010-11.

Brad Haddin has 1337 Ashes runs at an average of 43.12, notching up three centuries. What more a wicketkeeper should do to claim his place in this side? But there’s not much you can do if you are competing for a place with Gilchrist. That’s been the story of Haddin’s career too. Gilchrist, one of the game’s greatest, walks into the side not just for his superior average of 45.12, but also the fact he has scored runs at a strike-rate of over 92. Not to forget, as wicketkeeper Gilchrist has 96 dismissals from 40 innings in compared to Haddin’s 75 from 35.

Spin king Warne is Ashes most successful bowler Ashes in this century. With 108 wickets from 18 Tests at 22.42, Warne is the first name that makes it to this side. Off-spinner Nathan Lyon is the only one competing for this spot with 28 wickets from eight Tests. However the comparison is a distant one. Adding to his spin wizardy, Warne also has scored 575 runs at 28.75.

Johnson destroyed the Englishmen in the last Ashes series in 2013-14 and helped Australia reclaim the Ashes after six long years. The left-armer pace machine gets the slot ahead of Brett Lee and Jason Gillespie, for not just having a better record but also for the sheer impact. Johnson has 72 Ashes wickets at 23.91.

A late starter, Harris, who retired from the game last week, made a huge impact in the 12 Tests that he played. The right-armer has 57 wickets at 20.63. He also has Ashes fifty to his name. His only close contender was the dead accurate Stuart Clark, who has 30 wickets from seven Tests, coincidentally at the same average 20.63! However Harris has a better strike-rate of 43.3 compared to Clark’s 48.2. Harris is the apt first change bowler in the side.

Like Warne, McGrath too is among the first names to be jotted down while building this side. In Australian cricket history, the only man who can contest him for the title of the country’s greatest fast bowler is the great Dennis Lillee. McGrath, post 2000, has 91 Ashes wickets at 20.48. McGrath’s consistency in terms of line and length was his strength but the same can be said about his performances. In 2001, he helped Australia win the series, picking 32 wickets at 16.93; in 2002-03, he picked 19 wickets at 20 helping his side win again. In 2005, Australia lost the Urn, but McGrath was once again dead accurate claiming 19 wickets in three Tests at 23.15 and even in the twilight end of his career in 2006-07, he finished off with a high – helping his side reclaim the Urn with 21 wickets at 23.90. Well that defines consistency! 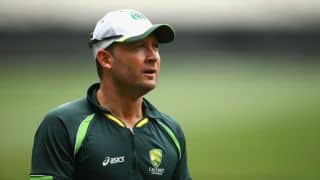 Ashes 2015: Michael Clarke hopes for series to be as exciting as 2005 edition