On that historic West Indies tour, Sardesai scored 642 runs at 80.25 with 3 hundreds. Before that, when asked at the customs on arrival whether he had anything to declare, Sardesai had announced: "I have come here with runs and I'll go back with more."

Google is celebrating Dilip Sardesai‘s 78st birth anniversary with an animated doodle that portrays him playing a lofted straight drive. Sardesai was one of India‘s premier batsmen in the 1960s and early 1970s, his most famous series being the historic tour of West Indies in 1970-71. India registered their first Test and series win against West Indies, home and away, on that tour.

Sardesai scored 642 runs in the series at 80.25 with three hundreds. The biggest of these was 212 in the first Test at Sabina Park, Jamaica the first double-hundred by an Indian on foreign soil. On that occasion Sardesai lifted India from 75 for 5 to 387. In the second Test, the one that India won, Sardesai top-scored in the first innings with 112.

Before that, when asked at the customs on arrival whether he had anything to declare, Sardesai had announced: “I have come here with runs and I’ll go back with more.” They affectionately called him Sardee-Maan in the islands as he grew in stature.

READ 10 things you need to know about Dilip Sardesai

In all Sardesai scored 2,001 runs from 30 Tests at 39.23 with five hundreds. While these numbers do not come across as outstanding, it must be remembered that his overseas average of 39.33 the third-highest among Indians with a 600-run cut-off.

Sardesai remains the first Goa-born to play Test cricket for India (Antao D’Souza played for Pakistan, while Ebrahim Maka was born in Daman), thus making him a favourite among quizmasters.

Sardesai scored 10,230 First-Class runs at 41.75 with 25 hundreds. In Ranji Trophy that average swelled to 54.53. Bombay did not lose a single Ranji Trophy match 61 of them when Sardesai played. 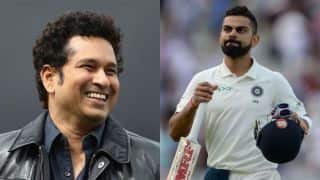