Get the live updates, most hilarious tweets and lot more on the game here.

India and Zimbabwe will meet for one last time on the current tour in the third and final Twenty20 International (T20I) match at Harare. Unlike the ODI series, this isn’t a dead rubber as both India and Zimbabwe have won one game each and have equal chance of winning the series.

The hosts were beaten badly in the last game and they would look to forget that performance and try to perform like they did in the first T20I. Indian side looks quite settled and they have given every new face a chance to perform on this tour, except for Jayant Yadav. Since this will be the last game, one can expect captain MS Dhoni to give the youngster his maiden international cap. On the other hand, Zimbabwean side is highly dependent on Hamilton Masakadza and Elton Chigumbura’s batting, while Sikandar Raza is also another good batsman who though is not in form. Their bowling, which looks quite imbalanced, need to take inspiration from their first game if they want to win this series.

If Zimbabwe anyhow wins this match, then this will be their first T20I series win in a two or more match bilateral series in this format. Also, Masakadza will become the first Zimbabwean cricketer to play 50 T20Is. Expect an exciting encounter between both the sides and get the live updates, most hilarious tweets and lot more on the game here.

This T20 series has seen Dhoni’s hair move up the shade card from grey to offwhite.#ZIMvIND

Come on #Zimbabwe ! Get over the line now! I’d be so so happy for y’all if you’ll win! #ZimvInd

The Young Gun Sran is back, This over will defy his Career.

Respect the opponents irrespective of who they are is what Team India teaches me every time :p #ZIMvIND — bAla Ji (@imDiehard) June 22, 2016

This is Still Chaseable because Chigumbura is stil there, need Something special #ZIMvIND — Lolwale (@sabkilengayab) June 22, 2016

when in form, Vusi plays some of the most aestheticaly pleasing drives #ZIMvIND — Pirate of Kariba (@mmconquer) June 22, 2016

However less traction #ZIMvIND series may have got, loisng the T20 series would be glaring — Suyash Sengar (@suyash_11) June 22, 2016

Amazing how Dhawal keeps missing his line, and fielders are not rushing enough with Chibhabha limping for runs — Nikhil (@CricCrazyNIKS) June 22, 2016

Today is the real test for indian bowler. Let see if they are able to defend this total #ZimvInd — Rajat Rao (@Rao10Raj) June 22, 2016

Kapil Dev was a great captain. Got us a WC. Revived cricket in India. Can we still make him play on that merit? NO #ZIMvIND — Adarsh Shenoy (@shenoy_adarsh) June 22, 2016

On a slow pitch where all have struggled…jadhav has stood tall to build. guide and finish the innings #ZIMvIND — Krishna Mittal (@mittalkrishna91) June 22, 2016

The Most Experienced Captain And The Biggest Finisher Of The World Departs 😛 #ZIMvIND — Šaiŷaarâ (@BeingKushSharma) June 22, 2016

Is this the end of era, hope not, want to witness more of dhonism, captain my captain, I am sure you will bounce back #ZimvInd #BCCI #dhoni — Anup Garg (@anup_garg30) June 22, 2016

India is on their way to lose another series against MINNOWS. Mahi gone..!#ZIMvIND — Umang Pabari (@UPabari) June 22, 2016

And we all wanted India to bat first! Glad that they finished off the ODI series without any hiccup!#ZIMvIND — HoldingWilleyCricket (@holdingwilley) June 22, 2016

Wtf is going on the batsman are so hurry & i know if india will loose today all blame will be on @msdhoni rather than stupid ones #ZimvInd — Mahendra Singh Dhoni (@ramani80) June 22, 2016

That’s great start for Zimbabwe, KL Rahul drags one onto his stumps and then Pandey is run out first ball. India in trouble at 27/3 #ZIMvIND — CricWizz (@CricWizz) June 22, 2016

MSD has batted just once this tour, would he like to promote himself today, considering he won’t get another bat for 3-4 months #ZIMvIND — Manikanta Aravind (@ManikantaAravi4) June 22, 2016

Good luck today boys @ZimCricketv !! I wanna hear the good news of a series win when I wake up from anesthetic #ZimvInd — Ryan Burl (@ryanburl3) June 22, 2016 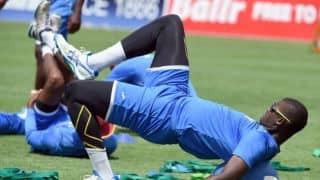