The touring sides have not had a terrific record against India on their soil. Worse, the Kiwi side has not won a single Test in India in last 28 years.

The time has finally arrived and the wait is finally over. India’s long home season, which will see them play a record 13 Tests, kicks off on Thursday, September 22, from Kanpur with the first of the three Tests between India and New Zealand getting underway. The occasion will be a momentous one as India will play their record 500th Test, a milestone worth cherishing. To make it memorable, the Board of Control for Cricket in India (BCCI) has invited its former captains to come and be a part of the celebrations. Many former captains, including the likes of Mohammad Azharuddin and Kris Srikkanth have given their consent to be a part of the historic Test.

Coming to the match, it will be a tough series for both the teams. For New Zealand, it is going to be difficult for obvious reasons. The touring sides have not had a terrific record against India on their soil. Worse, the Kiwi side has not won a single Test in India in last 28 years. Against the spin trio of Ravichandran Ashwin, Ravindra Jadeja and Amit Mishra, it is not going to be an easy ride for them on the turning pitches of India.

The hosts, on the other side, will be beaming with confidence. After beating West Indies in their own backyard, Virat Kohli and his men must be upbeat for a long, Test-heavy season. They have every reason to be confident. The team is yet to lose a series under Kohli. Also Team India has lost just a single Test in last 10 outings at home and have not lost a Test in Kanpur in last 33 years. The team is loaded with a number of match winners and appears to be a well-oiled machine at home.

As a matter of fact, it has a problem of plenty and that is why a player of Shikhar Dhawan’s class may have to sit out in the first Test in order to make way for the phenomenal KL Rahul. Murali Vijay may open the innings with him with Cheteshwar Pujara all set to play at three. No. 4 and 5 spots shall be occupied by skipper Kohli and his deputy Ajinkya Rahane, while the six, seven and eight positions will in all likelihood be taken by Ashwin, Wriddhiman Saha and Jadeja. If the playing conditions assist spin from day 1,Mishra may also get a look in. With Ishant Sharma ruled out from the first Test due to Chikungunya, Bhuvneshwar Kumar and Mohammed Shami may lead the pace attack.

New Zealand, on the other hand, may go in with a three-pronged spin attack as well. Ish Sodhi, Mitchell Santner and Mark Craig may get to play with Trent Boult and Neil Wagner taking the new ball. The batsman pick themselves barring Martin Guptill, who has been awful with the bat and may well be on his last Test trip to India. Luke Ronchi has been waiting in the wings and may replace him if he fails in the first Test. Kane Williamson, Ross Taylor and Tom Latham will hold the key.

Meanwhile, check the comparison of likely XIs of the two teams with the help of this infographic: 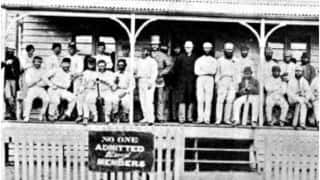