Murali Vijay won the toss and bat first. Get the live updates, most hilarious tweets and lot more on match No.53 of IPL 2016 between Rising Pune Supergiants here.

The 53rd game of the Indian Premier League is scheduled to be played between Rising Pune Supergiants and Kings XI Punjab at Visakhapatnam on Saturday. Both the teams are virtually out of the tournament but will look to sign off on a winning note and one can expect the battle to be an intense one as they have nothing to lose. LIVE Streaming RPS vs KXIP, IPL 2016: Watch Free Live Telecast of Rising Pune Supergiants vs Kings XI Punjab at Visakhapatnam

KXIP will be banking on their batting to bail them out as they have some in-form and game changing batsmen. Their bowling has been good but were dismantled in their previous encounter against Royal Challengers Bangalore. RPS on the other hand have been hampered with injuries and will look to sign off on a winning note.

The match is expected to start in sometime, get the live updates, most hilarious tweets and lot more on match No.53 of IPL 2016 between Dehi Daredevils and Kings XI Punjab here:

Toss: KXIP have won the toss and elected to bowl first

YOU’VE GOTTA BE KIDDING!!! DHONI FINISHES THE GAME OFF WITH A SIX!

Only N Srinivasan could have won this match for you Dhoni. #RPSvKXIP

Dhoni playing a lone hand. Perera’s dismissal was a big setback as match had started to tilt ever so slightly Pune’s way — Cricketwallah (@cricketwallah) May 21, 2016

Ravi Ashwin gets a taste of how it feels to be Ambati Rayudu! #RPSvKXIP #IPL — HoldingWilleyCricket (@holdingwilley) May 21, 2016

#RPSvKXIP Dhoni is paying for his mistakes.at times he takes himself too seriously.why not just hit it out without thinking of result. — RahulM (@RahulMS28) May 21, 2016

Seriously whats the point of Pathan? MSD playing him just to justify he was right all along. #RPSvKXIP — Suyash Swaroop (@sscomp32) May 21, 2016

Pune stumbling, as has been the case all season, and in danger of finishing bottom of the league — Cricketwallah (@cricketwallah) May 21, 2016

Thank you Patna for turning out in huge numbers and making #IPLfanpark a huge success #RPSvKXIPhttps://t.co/EodGEnZGhL — IndianPremierLeague (@IPL) May 21, 2016

Khawaja always gets off to great start, but couldn’t seize the opportunity to capitalise. Hope he does it today in last match #RPSvKXIP #IPL — voice of kharan (@polyen_news) May 21, 2016

Bailey outdone by Axar’s ‘guile’; tells a thing or two about his prowess vs spin bowling. #RPSvKXIP #IPL — HoldingWilleyCricket (@holdingwilley) May 21, 2016

Ashwin and Gurkeerat did nothing whole season but still will retain their place in India based on today’s performance #RPSvKXIP — Captain Humour (@jstjoking) May 21, 2016

.@ajinkyarahane88 would look to continue his blistering form and @Uz_Khawaja will look to make some serious dents to the bowling. Let’s go! — Pune Supergiants (@RPSupergiants) May 21, 2016

This time it goes all the way for a six! @rishid100 hits a superb shot. More to end the innings please. #LivePunjabiPlayPunjabi #RPSvKXIP — Kings XI Punjab (@lionsdenkxip) May 21, 2016

Some happy news for @imVkohli, with a busy test schedule @ashwinravi99 back to his supreme best #RPSvKXIP — Deepish (@I_am_deepish) May 21, 2016

Kings XI Punjab should be banned from the IPL, just for the fact that they have now picked Behardien in consecutive matches #RPSvKXIP — Cricket Bakchod (@AllTimeBakchod) May 21, 2016

When others can’t do what #Dhoni needs them do, then #Ashwin comes to the party. #Vijay gone at a crucial time #RPSvKXIP #eit20 — Akram Fazal Mirza (@TheOnlyMirza) May 21, 2016

Ok logging off for the movie…hope Murali vijay wins and sends a message to dhonitards #RPSvKXIP — Man of Justice (@SuperGops) May 21, 2016

Murali Vijay’s batting season comes to an end. It’s been a glorious one even as his team has struggled badly — Cricketwallah (@cricketwallah) May 21, 2016

Gurkeerat Mann came to bat ahead of miller and farhan ..some joke #RPSvKXIP — pankaj juyal (@pankajjuyal03) May 21, 2016

Huge respect for those who are watching #RPSvKXIP , and more than that, they’re feeling excited — Dexter (@MunnaKaTunna) May 21, 2016

Pathan providing more evidence as to why he doesn’t belong here. #RPSvKXIP #IPL — HoldingWilleyCricket (@holdingwilley) May 21, 2016

It’s such a joy to watch Murli VIjay bat, especially when Dinda or Perera is bowling to him.#RPSvKXIP — Flying Table Fan (@flyingtablefan) May 21, 2016

If there is one bowler Amla doesn’t love playing, Ashwin is that. #RPSvKXIP #IPL — HoldingWilleyCricket (@holdingwilley) May 21, 2016

First 50+ stand for first wicket for KXIP in last 7 matches. They had 3 such stands in their first 7 matches. #RPSvKXIP — Bharath Seervi (@SeerviBharath) May 21, 2016

Any idea what siddhu and his fellow commentator are up to? #RPSvKXIP — Chethan Misquith (@ChethanMisquith) May 21, 2016

The RPS line up should show a plane against every player’s name as all of them are flying home today. #RPSvKXIP #KXIPvRPS #IPL — Main Teja Hoon (@Main_Teja_hoon) May 21, 2016

Positive start from Hashim Amla. Can he convert his start into a bigger knock? #KXIP would certainly love him to do so #RPSvKXIP#IPL2016 — PrìnXé NiãZ (@Fst_Cricket) May 21, 2016

The last time Irfan Pathan opened the bowling in an IPL match was on 19 May 2013, in his last game for DD against PWI at Pune.#RPSvKXIP — Deepu Narayana (@deeputalks) May 21, 2016

Punjab vs Pune match is like a clash between Bobby Deol and Uday Chopra. Tough for you to decide who is the worst. #RPSvKXIP — Johnny Bravo (@khanakram421) May 21, 2016

This is going to be the first bottom four finish for MS Dhoni in IPL. A loss here will make his team last. #RPSvKXIP #IPL2016 — Readers Mail (@ReadersMail) May 21, 2016 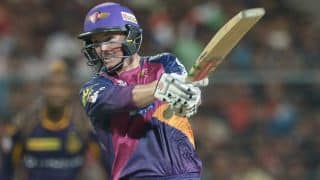