Who is the actual kid? The question was on everyone's lips after Dhoni joined Tahir and Watson's sons for a playful run.

Who is the actual kid? The question was on everyone’s lips after Mahendra Singh Dhoni, lively and full of fun, joined Imran Tahir and Shane Watson’s sons for a playful run at the Chepauk.

While he rarely betrays emotions on the field regardless of the match situation, the story can often be different off it.

Dhoni was in a playful mood after his team Chennai Super Kings’ convincing win over Kings XI Punjab in the Indian Premier League (IPL) on Saturday evening.

In the video posted by the franchise, the 37-year-old, after entering the frame from behind, is seen running alongside the kids only to lift Tahir’s son and run back to the finishing line.

“Jr. #ParasakthiExpress and Jr. Watto having a sprint face-off and a lightning joins them! Priceless!” CSK wrote on the team twitter handle.

Earlier, coming in to bat at No. 4, Dhoni hit Sam Curran for a six over deep mid-wicket on the second ball of the 19th over. In the same over, Dhoni hit a couple of fours.

The CSK skipper ended up scoring an unbeaten 37 off 23 balls with the help of four fours and a six. 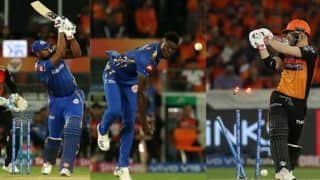 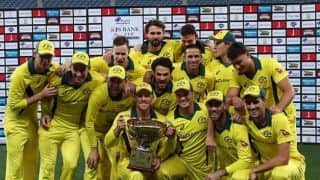