The brainchild behind the match was Basant Chaudhary, who also revealed that Chhurim Sherpa, the lady mountaineer from Nepal, will carry the bat and jersey of late Hughes on the top of Mount Everest.

In the memory of Australian left-handed batsman Phil Hughes, the Cricket Association of Nepal (CAN) in association with Cricket Australia (CA), had organised The ‘Phillip Hughes Tribute Match’ on April 11. The 63-over match which was organised also paid tribute to the legendary commentator Richie Benaud, who recently passed away at the age of 84.

The brainchild behind the match was Basant Chaudhary, who also revealed that Chhurim Sherpa, the lady mountaineer from Nepal, will carry the bat and jersey of late Hughes on the top of Mount Everest.

“Chhurim Sherpa had earlier climbed the Mt. Everest in 2011,” Chaudhary was quoted from a report of ‘The Nation’ when the match was going on.

“The woman has agreed to carry Hughes’ Philippines-made jersey and bat along with our country’s national flat. During her journey to the top of the mountain, she will also sing the lyrics (“I feel proud of my nation”) composed by me”, he added.

Later, the mountaineer, who is a keen follower of cricket and rates Hughes as one of the best cricketers, spoke on phone saying, “It is a rare opportunity and honour for me. This will not only be a tribute to Phillip Hughes but my attempt to spread the message of humanity.”

“I strongly believe that sports can bring people together. It helps us transcend geographical boundaries, political considerations, and issues of class, colour and creed”, she further added.

Before the commencement of the 63-over match, Binod Das, who later captained the ‘Team Blue’ said, “This is my last match before I retire after playing for 17 years”.

“My message to Hughes family is to stay strong. He was certainly one of the most loved ones and we all will miss him,” Das added.

Cricket Australia’s Chairman Wally Edwards graced the match with his presence and will be leaving for Dubai for International Cricket Council (ICC) meetings on Sunday.

Rajeev Shukla, the Indian Premiere League (IPL) commissioner of the Indian cricket board had also sent a message for the match played in Kathmandu, Nepal. 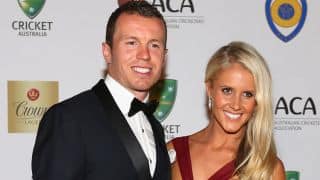