Recently, a picture from the movie surfaced, which showed Emraan and Nargis strike a similar pose which Azhar and Bijlani once famously did.

Emraan Hashmi starrer ‘Azhar’, a movie based on the life of former captain of the Indian cricket team Mohammad Azharuddin, is set to release this Friday, May 13. The movie which depicts the life and times of the popular cricketer also has Nargis Fakhri playing Azhar’s love interest Sangeeta Bijlani and Prachi Desai as his first wife. Mohammad Azharuddin lost his cool with makers of his biopic ‘Azhar’?

Even before its release, the movie has created enough buzz to be easily bracketed into this year’s biggest releases. It will show Azhar’s version on his roller coaster career, which saw him shot to limelight with three consecutive tons in his first three Tests, becoming India’s captain, getting embroiled into match-fixing and getting himself out of the mess. Mohammad Azharuddin: 11 facts you should know about the former India captain

Recently, a picture from the movie surfaced, which showed Emraan and Nargis strike a similar pose which Azhar and Bijlani once famously did. Both the images resemble a lot, giving fans ample evidence that the makers have tried very hard to keep it as real as they can. With it release approaching, fans cannot wait to watch and find out the true story behind the controversial life of Azharuddin. 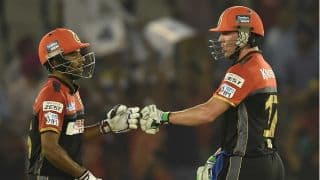