On occasions, Jack Leach was seen polishing and cleaning his glasses.

Jack Leach might just have one run to show for his contribution in England’s come-from-behind win in the 3rd Ashes 2019 Test at Leeds on Sunday, but his role in the match-winning partnership of 76 runs was as important as that of Ben Stokes. Leach played 17 balls in the partnership for a solitary run but ensured that does not give away his wicket.

Also Read: Ashes 2019: ‘Outrageous’ Ben Stokes revels in ‘one of the two best feelings ever felt on a cricket pitch’

On occasions, the left-arm spinner was seen polishing and cleaning his glasses at the end of overs. It happened quite a few times but Leach was ‘ok with looking stupid’ out in the middle.

“I know I look stupid when I’m out there. but it got the job done,” Leach told Sky Sports.

We can confirm we will offer Jack Leach free glasses for life https://t.co/7rfPBK77GS

Stokes propelled England to an inconceivable victory over Australia on the fourth day of the third Test. England had their task cut out as they needed 203 runs to pull off a victory. Joe Root was dismissed off Nathan Lyon after he added just two runs to his overnight score.

Jonny Bairstow did show some resistance with his knock of 36 off 68 but failed to capitalise on a good start. Jos Buttler and Chris Woakes departed after managing just a solitary run each. Jofra Archer entertained the crowd with three boundaries but got out after failing to clear the fence.

With England nine down for 286, Australia were just inches away from retaining the Ashes but Stokes again turned out to be the hero for England with his innings of 135*, which included eight sixes and 11 fours.

With a victory at Headingley, England have kept the series alive. The fourth Test of the series starts on September 3 in Manchester. 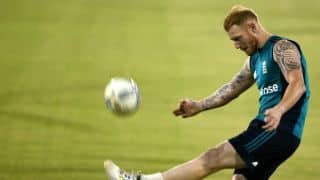