Stokes' sensational 135 not out saw England to their highest successful run chase of 359.

Many sporting careers contain their share of ups and downs but few can match the highs and lows that have come the way of England’s Ben Stokes.

He became a national hero for the second time in just over a month when his astounding 135 not out saw England to an incredible one-wicket win in the third Ashes Test at Headingley on Sunday.

Stokes’s ball-striking that yielded 11 fours and eight soaring sixes was impressive but so too was the maturity he demonstrated during five-and-a-half hours at the crease, with the all-rounder taking 50 balls to score his first two runs on Saturday when it was vital England, then three down, did not lose any more wickets.

(READ: Ben Stokes revels in ‘one of the two best feelings ever felt on a cricket pitch’)

It had been a similar story in the World Cup final, where an expertly paced 84 not out saw England tie the 241 total of his native New Zealand at Lord’s before a seemingly exhausted Stokes then hit the Super Over runs that helped his team to a narrow win.

But “maturity” was not the word associated with Stokes when, in the early hours of the morning following a one-day international against the West Indies in Bristol in September 2017, he became involved in a fight outside a nightclub that led to his arrest.

Although eventually cleared of a criminal charge of affray, the immediate fall-out from the incident saw Stokes stripped of the England vice-captaincy and not be considered for selection for the 2017/18 Ashes tour — a series where, in his absence, the team meekly subsided to a 4-0 series defeat by Australia.

Stokes already knew about on-field setbacks — he had been the bowler who when asked to defend 19 in the last over of the 2016 World Twenty20 final in Kolkata, was promptly hit for four successive sixes by opposing all-rounder Carlos Brathwaite as the West Indies turned a seemingly certain defeat into a memorable win.

But having come back from that reverse, the knowledge the court case nearly cost him his England career seems to have inspired Stokes to even greater heights since returning to international duty.

(READ: To hell and back: Ben Stokes’ incredible redemption)

Stokes was born in Christchurch, New Zealand but moved to Britain as a boy when his father Ged, a former Kiwi rugby league international, got a job coaching Workington in northwest England. He was soon on the radar of county side Durham, making his debut as a teenager and appearing for England at Under-19 level, where his abilities as a left-handed batsman, lively paceman and excellent fielder all became quickly apparent.

Having blotted his copybook by being sent home for a breach of discipline from a tour of Australia with the second-string England Lions in 2013, Stokes was included in the senior squad for the 2013/14 Ashes in Australia.

Australia whitewashed England 5-0 but a rare moment of joy for the tourists came with Stokes’ defiant maiden Test century in Perth.

Stokes, however, missed the 2014 World Twenty20 in Bangladesh after reacting to a dismissal in Barbados by punching a dressing room locker and sustaining a broken wrist.

A difficult year followed and such was his loss of form he was omitted from England’s squad for the 2015 World Cup, where the team’s woeful first-round exit paved the way for their triumph four years later.

Stokes, however, was soon back in the fold and in January 2016 his remarkable 258 off 198 balls against South Africa in Cape Town saw him score England’s quickest Test double century.

His all-format talent also meant Stokes, now 28, become a millionaire twice over in the lucrative Indian Premier League Twenty20 tournament, yet there has never been a doubt about his desire to play for England.

Nor is he one for looking back, with Stokes making it clear after Sunday’s innings that England still had a job to regain the Ashes.

Asked if his life had been different a year ago, Stokes answered: “That was a year ago. A long time ago.” 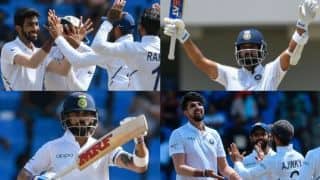