The Israeli umpire, who lost his life on Saturday, also took his photo while paying his tribute to Phil Hughes.

Hillel Awasker, the Mumbai born Israeli umpire, who died after being struck by ball on Saturday had paid his tributes to Phil Hughes minutes before his death.

As reported by MiD-Day, Awasker’s wife Jenny speaking from Ashdod on Monday said, “My husband took his own photo while paying tribute to the Australian player [Hughes] who had died two days ago. He promised me that he would send me the picture during the break or after the match. Alas, that moment never came. Indeed, it’s sad to lose two cricket-related men in one week.”

Awasker, who was 55 years old, was struck by a ball hit by a batsman during a league match in Ashdod. The ball hit the stumps first, then ricocheted off it and hit the umpire. He was rushed to hospital but soon succumbed to his injuries.

Awasker, who moved to Israel in 1977, married Jenny in 1983, and the couple have two daughters.

“He loved the game so much as a player, umpire and coach. He was involved in coaching children too. He went to England and learnt coaching skills there. The children here loved him so much as their coach,” added a distraught Jenny. 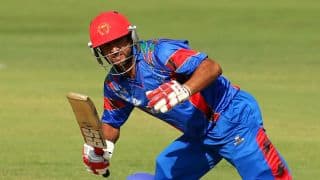