He said that the Dutch didn't have the flair of the beautiful game.

Chile coach Jorge Sampaoli complained about the defensive style of the Dutch after his team lost 2-0 in the last round of the FIFA World Cup 2014 Group B. The Netherlands topped the group, setting a round of 16 clash with Mexico and avoiding Brazil in the knockout stage while Chile will meet the hosts and five time champions, reports Xinhua.

In Monday’s match, Chile had 64 percent of ball possession, but failed to create major chances as they produced seven shots with just one on target. The Netherlands had thirteen shots, of which eight were on target.

“We kept going and fighting for 90 minutes, but ultimately we didn’t get the result,” Sampaoli said. “We wanted to win this game and we gave our all. We felt that the Netherlands only wanted to defend. We expected the Netherlands to go on the counter-attack with regularity and for such a long time we limited them to long shots,” Sampaoli added. “I felt that our intensity and commitment was outstanding. Our players should have their heads held high as we’ve played well in the three games so far and we’re now through to the round of 16.”

But the Dutch thought the other way. “It was a match of the highest quality,” Dutch coach Louis van Gaal said. “We limited Chile to a handful of opportunities, we neutralized them extremely effectively, and particularly in the second half we created more chances.”

Van Gaal continued to play with the 5-3-2 format. Partly due to the suspension of Robin van Persie and the concussion of Bruno Martins Indi he sent a different line-up compared with the one he used in the 5-1 thrash of defending champions Spain and 3-2 win over Australia.

“We did have to change our style today,” added Van Gaal. “I will always pick a system and a strategy that will help us win. However, we’re not perfect. In possession we still need to improve, but I do think we’re very good without the ball.” Dutch midfielder Wesley Sneijder was also not pleased with Chile coach’s comment.

“It’s a little bit disrespectful if he says we didn’t want to play football and we didn’t do anything today,” Sneijder said. “We were the ones who won 2-0. We know that we can play compact football, and up front, with our attackers, we are very strong. So it was up to Chile to create something.”

In the next round the Netherlands face Group A runners-up Mexico on Sunday in Fortaleza, while Chile take on Brazil in Belo Horizonte. 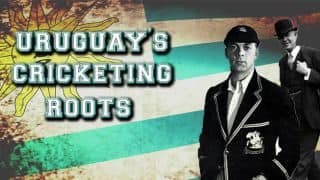