Messi admitted that Argentina failed to play to the levels that they had aimed for against Iran.

Lionel Messi admitted that Argentina must improve if they are to remain in contention for a third FIFA World Cup 2014 title.The Albiceleste struggled to break down a stubborn Iran at the Mineirao stadium Saturday before a moment of Messi brilliance secured the team’s second victory from as many matches in the tournament, reports Xinhua.

“We struggled to find space but luckily we were able to win,” Messi said after the match.It’s difficult to play against teams that close up like they did. We have to correct our errors. We are the first to realise that we aren’t playing at the level we want to. Today we were able to get three points which means we don’t have to suffer in the last (group) match. I was very happy when I scored because all of us were trying to break their defence.”

Argentina, World Cup winners in 1978 and 1986, enter the match against Nigeria on June 25 all guaranteed of a berth in the tournament’s knockout phase. The clash in Porto Alegre is likely to attract hordes of Argentine fans, given the city’s proximity to the Brazil-Argentina border.

Messi said fans’ support would provide the team with an added edge. “Porto Alegre is very close to Argentina so we know that there will be a lot of fans there and that will be good for the team.”

Argentina coach Alejandro Sabella admitted his team had been reliant on Messi in their first two World Cup matches. “We want to improve obviously,” he said. “There are many things we have to think about and improve. ”

All players who played today have contributed to this victory but of course we have a genius who is called Messi. Fortunately he is Argentine. Everybody would have liked to have Messi but it is us who have him.” 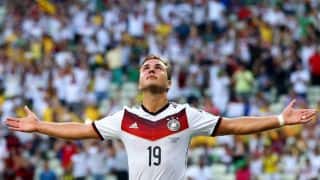