The win ensured Pakistan their seventh consecutive T20I win since July this year.

If Pakistan trampled over a listless Australia side in the Twenty20 International series which they whitewashed 3-0, New Zealand proved they aren t going to be pushovers by any stretch of imagination. It was left-arm pacer Shaheen Afridi, who saved the game after defending 17 runs in the final over to hand Pakistan a thrilling two-run win in the first of the three-T20I series against New Zealand at the Sheikh Zayed Stadium in Abu Dhabi on Wednesday.

After restricting Pakistan to 148/6 in 20 overs, New Zealand were off to a flier with opener Colin Munro smashing six boundaries and three sixes during his belligerent 42-ball 58. The other opener, Glenn Phillips departed as early as the sixth over after he was cleaned up by Hasan Ali. Munro followed Phillips back to the pavilion in the 12th over after he mistimed a shot that saw Asif Ali pick up a dolly at long-on to give leg-spinner Shadab Khan his first wicket of the match. New Zealand were 79/2 were Munro departed.

The Kiwis then lost two quick wickets in skipper Kane Williamson (12) and Colin de Grandhomme (6). Ross Taylor then took charge of the innings and the equation was brought down to 17 off the final over with Taylor on strike.

He took a single from the first ball off Afridi to give Tim Southee the strike. Southee smashed the next ball for a boundary through fine leg to bring it to 12 off four balls. However, Afridi kept his cool, angling in controlled low full tosses as New Zealand ended their innings at 146/6. Taylor, who struck three boundaries during his 26-ball knock, was unbeaten on 42. For Pakistan, Ali was the pick of the bowlers with 3/35.

Earlier, Pakistan lost in-form opener Babar Azam for seven in the third over after Sarfraz Ahmed opted to bat. Sahibzada Farhan too fell for one as Pakistan were reeling at 10/2 in the fourth over. However, a 67-run partnership for the third wicket between Mohammad Hafeez and Asif Ali, thrusted Pakistan to 148/6. Hafeez top scored with 45, an innings that was laced with five boundaries and two hits over the fence. For the BlackCaps, pacer Adam Milne claimed two wickets.

The win ensured Pakistan seventh consecutive win since July this year. The next T20I will be held at the Dubai International Cricket Stadium on Friday. 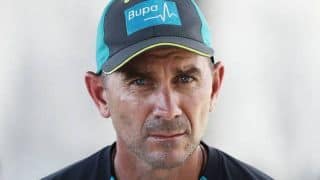