Opener Babar Azam struck a strokeful half century, his second of the series, while leg-spinner Shadab Khan claimed three wickets as Pakistan thrashed Australia by 33 runs to clean sweep the three-match Twenty20 International series at the Dubai International Cricket Stadium on Sunday.

The series whitewash was Pakistan s first ever against Australia in a limited-overs series and their 10th series win under Sarfraz Ahmed, who donned the captain s hat from September 2016.

Pakistan were helped to 150/5, courtesy Azam s 40-ball 50, an innings that was laced with five boundaries and a six.

Chasing the 151-run target, the Australia batting never recovered from their drubbing in the first match on October 24 when they were castled for 89. Skipper Aaron Finch failed once again, scoring just one before he was caught at mid-on by Mohammad Hafeez to give pacer Faheem Ashraf his first wicket.

Promoted to the open the innings alongside Finch, Alex Carey looked promising during his nine-ball 20 which was decorated with two boundaries and as many hits over the fence. However, his innings was cut short after a leading edge saw Ashraf take a dolly of a catch at midwicket off Hafeez.

The leg-spinner Khan then accounted for the wickets of Chris Lynn (15), Glenn Maxwell (4) and Mitchell Marsh, who top scored with 21 along with Ben McDermott. Australia were back in the hut for 117 in 19.1 overs with not much resistance left from the batting arsenal.

Earlier, Azam and the new opening partner Sahibzada Farhan, included for the first time in the series, conjured a 93-run partnership. The 22-year-old Farhan, playing in just his second T20I, was the first to depart after he was caught at long-off by Andrew Tye in the 13th over off Nathan Lyon. Farhan scored 38-ball 39. Azam followed his partner back to the pavillion in the next after he was cleaned up by Tye.

There were not many contributions to follow after the dismissals of the openers. Veteran allrounder Shoaib Malik added 18 to become the second highest second highest run scorer in T20 international history, going ahead of New Zealand’s Brendon McCullum. Hafeez was unbeaten on 32.

Pakistan will remain in the UAE where they will play the touring New Zealand side in three T20Is and as many ODIs and Tests beginning with the first T20 International on October 31. 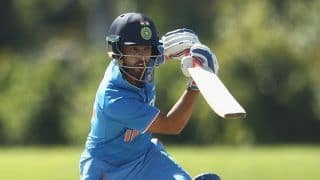 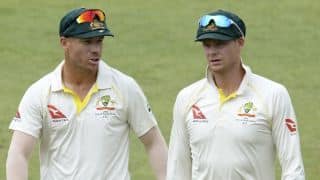