Stokes will not feature in the Lord s Test next week as he appears in a Bristol court in regards to the case regarding his alleged involvement in a street brawl last September.

One of the most engaging Test matches in modern memory came to an end on Saturday with hosts England taking the required five Indian wickets in the 15th over of the day to win by 31 runs. It was a special win in England s 1,000th Test match, and the man of the final day, Ben Stokes, cut an emotional figure after claiming 4/40 in India s second innings.

India, from an overnight 110/5, resumed the fourth day with 84 runs to get but fell short, bowled out for 162. India lost Dinesh Karthik without a run added, the Indian wicketkeeper nicking the sixth ball of the morning from James Anderson to Jonny Bairstow. Virat Kohli and Hardik Pandya steadied the chase for 63 deliveries until, with 53 runs to get, Stokes removed the Indian captain with his second delivery of the morning. Three balls later, Stokes added Mohammed Shami.

Stokes, fittingly, claimed the final wicket to fall to finish with 4/40.

An emotionally and physically drained Stokes, speaking to the host broadcaster moments after England s win, could hardly find the words to express himself.

It was great. Last night we were magnificent with the ball. I thought we were a bit behind after taking the lead, the way Sam Curran came out and played at such a young age, it was the turning point in this Test match. It was just great to be part of this game, said Stokes.

Asked about his dismissal of Kohli for 53, when the Indian captain walked across the stumps, Stokes said it was the definitive turning point of the morning.

He played a brilliant knock in the first innings, with the ball swinging he was moving across to play the outswinger, tried to swing it back into him. Moments like that change a game in these tight ones, said Stokes.

Stokes will not feature in the Lord s Test next week as he appears in a Bristol court in regards to the case regarding his alleged involvement in a street brawl last September, but believes England are in the driver s seat after this win in Birmingham.

Great start to this tough five match series. Being 1-0 up we are in the box seat at the moment. He said. We weren’t quite sure what to expect when we got here (today). We needed five wickets and we had the confidence, but these games thought us how to stick together as a team. Gives us heaps of confidence. We have a five-Test match series and we have to take as much confidence as we can. 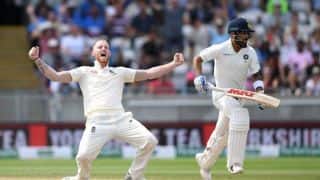 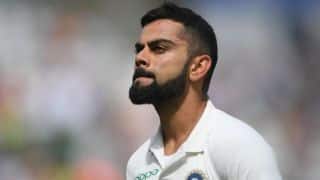 India vs England, 1st Test - There is no hiding from this loss: Virat Kohli