4:51 pm IST: It is getting close now. Hardik Pandya has hit a boundary off Ben Stokes and it is 33 needed for India.

4:31 pm IST: Ishant Sharma has taken two boundaries, one a calculated gilde other a streaky one over the slips. 150 up for India. 43 needed for India.

4:21 pm IST: Cometh the hour, Cometh Ben Stokes – Andrew Flintoff anyone – He gets his second wicket of the over. Mohammed Shami gone, India eight down

4:17 pm IST: Big one by the Big Ben. Kohli is trapped in front the ball kept low but more importantly the ball seamed just enough to miss the bat and on to the pads. India take the review; had to – but to no avail. Kohli goes for 51. India seven down for 141.

4:08 pm IST: Loose from James Andersonl down the leg and Kohli clips it easily for a boundary and brings up his fifty. That’s 200 runs in the match for the Indian skipper. More importantly 113/6, need 61 to win

3:54 pm IST: Good stuff by Hardik Pandya. He has not got into his shell ,but has looked assured in the middle. Virat Kohli would be loving this. India 120/6. Pandya has faced most deliveries in the first 25 minutes.

3:36 pm IST: The first action of the day is not good for India. Dinesh Karthik departs with James Anderson claiming the wicketkeeper batsman. Karthik goes for 20. India 112/6

Hello and welcome to our live coverage of Day 4 of the 1st Test between India and England at Edgbaston. After three absorbing days of play, the climax is upon us. India are 85 runs away from a memorable win, England need five wickets to take 1-0 lead. The key remains Virat Kohli.

India were 110 for five in their second innings, needing a further 84 runs to reach their victory target of 194, at stumps on the third day of the first Test against England at Edgbaston on Friday. India captain Virat Kohli was 43 not out following his first-innings 149, the star batsman s maiden Test century in England, with Dinesh Karthik unbeaten on 18. Earlier, India dismissed England for 180 in their second innings, with fast bowler Ishant Sharma taking five for 51 in 13 overs. Sam Curran made 63, his maiden Test fifty coming in just his second match at this level.

Quotes: We can get Virat Kohli out, no one is invincible in cricket: James Anderson

Quotes: Bowling a lot of overs for Sussex helped me take 5/51: Ishant Sharma

News: R Ashwin first Indian to 200 wickets under one captain 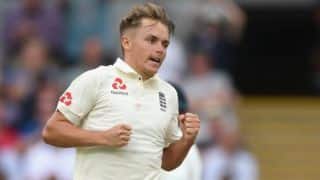