James Anderson said England could dismiss India captain Virat Kohli and win the first Test at Edgbaston as “no one is invincible in world cricket”. India need another 84 runs for victory with five wickets in hand with two days to go in the Test. Most importantly for India, Kohli and Dinesh Karthik are at the crease overnight and thus they can breathe a bit easy but Anderson has other plans for them.

If India achieve their target of 194, it would be their highest chase in England eclipsing their successful chase at The Oval in 1971 when they made 174/6 to win the Test and subsequently the series. It will also be the third highest chase ever at Edgbaston.

“We’ll go to bed dreaming about getting Kohli out first thing,” said Anderson. “No one is invincible in world cricket. We can get him (Kohli) out. If we recover well tonight and come back fresh in the morning, we know it’s going to be 25-30 overs max one way or the other – so we can give it all we can.”

Kohli’s magnificent 149 earlier in this match, his maiden Test century in England, meant India were only 13 runs behind in the first innings when it looked as if they might be at least 100 runs in arrears. His century was also notable for the way he shepherded the tail.

Anderson, England’s all-time leading Test wicket-taker, admitted that it had been brilliant.

“If he (Kohli) bats like he did first innings even batting with the tail, it was so hard to keep them on strike, have six balls at them,” he said. “He just managed to find the gap, or get down the other end – the way he batted with the tail was brilliant. We need five wickets, simple as that, fairly quickly – otherwise, they’ll get the runs. It’s a really exciting place to be, because you know we could do something special tomorrow by winning this.”

The situation in the first of this five-Test series might have been very different had Kohli not been dropped in the slips by Dawid Malan on 21 and 51 en route to his 149. Anderson was the unlucky bowler when Malan missed Kohli the first time.

“It’s an area where we’ve struggled for two years now. You can’t drop Virat Kohli on 21, because he’s one of the best players in the world, and he’ll capitalise on that – which he did. All we can do is work extremely hard at it, and hope to improve,” he said.

Earlier in the day, England collapsed horribly to 87/7 as Ishant Sharma picked up three wickets in one over. But then young seamer Sam Curran showed the spectators that he could bat too, with a 65-ball 63 that took his team to a respectable 180 and England set India a fairly challenging 194 to win. Curran followed up his bowling performance of 4/74 with a fifty in just his second Test match.

“I remember me as a 20-year-old, and I didn’t know what was going on,” said Anderson, 36. “He (Curran) knows exactly what he’s doing, how to set batsmen up, and we saw he has talent with the bat as well. To go out in that situation and show the guts and determination he did to get the team back into the match, when it looked like we were down and out, I thought was brilliant from such a young guy,” he added.

With Inputs from AFP 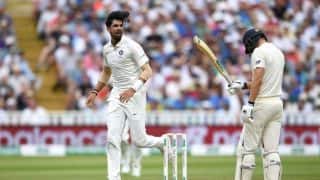