While most of his India team-mates were playing in the IPL, Ishant was sending down crucial overs across England in the County Championship and in 50-over cricket.

On Friday, Ishant took 5/51 to help India bowl out England for 180. In a very fine spell of 6.4-0-21-3 before lunch, he stunned England who slipped to 86/6 at the interval, and when his over continued in the second session Ishant claimed a third wicket to make it 87/7.

While most of his India team-mates were playing in the IPL, Ishant was sending down crucial overs across England in the County Championship and in 50-over cricket, which he acknowledged as being very helpful. In four four-day matches, Ishant took 19 wickets an 23.06 apiece with a best of 4/52. In the Royal London One-Day Cup, he sent down 44 overs in six matches and claimed eight wickets.

Playing country cricket made a big difference, said Ishant. Yes, I was somewhat disappointed too, but as the saying goes what happens, happens for the better . It was a good experience, I enjoyed it quite a bit. It was good to bowl with the Dukes ball, but what really helped was having a lot of overs behind me. I only played four matches for Sussex, but I bowled over 200 overs [sic 114.3] in that time, and then played some one-daters, so it really helped.

After bowling well but finishing with figures of 17-1-46-1 in England s first innings, Ishant had 13-0-51-5 in their second. For Ishant, in his 83rd Test, making an impact for India with a cluster of wickets meant a lot because, as he admitted, he had heard plenty about how luckless he has been. I had been given this tag, of a bowler who keeps bowling and bowling but doesn t get wickets, and I was tired of hearing that that I keep bowling well but the wicket column doesn t reflect it and that I kept playing so many Test matches, said Ishant. I ve worked really hard and now it feels good to have taken five wickets abroad, that too in the second innings, to put India in a good position. I have focused on taking wickets, not to earn that tag of a bowler who bowls well but doesn t add to his wickets column.

This was his first five-wicket haul in three years, dating back to the tour of Sri Lanka. Asked as to what worked for him in Englands second innings, the 29-year-old said it was all about maintaining lengths.

Our plan, especially in the first innings, was to go target the left-handers, more so with my angle and the ability to move the ball away from them. My plan was to start from over the stumps but if the ball started to swing then straight away move around the stumps, said Ishant. But then in our bowling meetings our bowling coach told me to just come from around the stumps, because from that angle the batsmen would find it tougher. When I get into rhythm and starting moving the ball, it becomes very tough for left-handers. 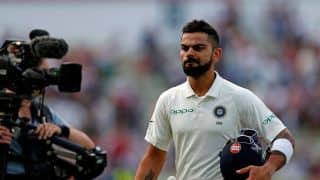