1st Test: Sri Lanka lose Thirimanne before lunch on Day 2 after bowling out New Zealand for 249

1st Test: Sri Lanka lose Thirimanne before lunch on Day 2 after bowling out New Zealand for 249

Sri Lanka went to lunch on day two of the first Test on 34 for one, trailing New Zealand by 215 runs.

Sri Lanka went to lunch on day two of the first Test on 34 for one, trailing New Zealand by 215 runs.

Earlier Sri Lanka bundled out New Zealand for 249 as the tourists lost five quick wickets and added just 46 runs to their overnight score.

Ross Taylor went for 86 on his first delivery of the day as he attempted a casual cut shot to a harmless delivery from seamer Suranga Lakmal and was caught behind.

Mitchell Santner then shouldered arms to a Lakmal ball that nipped back and was trapped leg before wicket for 13.

William Somerville was given caught bat-pad to Akila Dananjaya but he successfully overturned the decision after a review to deny the off-spinner his sixth wicket.

Tim Southee’s promising innings was cut short when he was run out on 14 attempting a suicidal single.

Lakmal then removed Trent Boult and Ajaz Patel in successive deliveries to finish with figures of four for 29. He will be on a hat-trick when New Zealand resume their second innings.

Thirimanne, controversially picked ahead of former captain Dinesh Chandimal, made an early return to the pavilion after falling to a terrible shot.

Patel had replaced Boult from the Dutch Fort End and Thirimanne gave the left-arm spinner the charge but got nowhere near the pitch of the ball, missing it completely and Watling completed an easy stumping.

Two balls later, Karunaratne offered a chance to Taylor at first slip attempting a drive off Somerville but the fielder failed to hold onto the chance 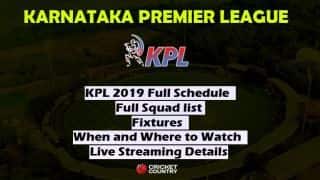