Taijul Islam claimed six of the 15 wickets that fell on day three of the Chittagong Test.

Bangladesh have beaten West Indies by 64 runs in the first Test in Chittagong to gain a 1-0 lead in the two-match series. This is Bangladesh’s first Test victory over West Indies in nine matches dating back to 2009 and first at home ever.

The win came before tea on the third day, after Bangladesh were bowled out for 125 to set West Indies a target of 204. The tourists slipping to 11/4 by lunch left the outcome of this Test in very little doubt, and sure enough Bangladesh took the remaining six wickets to crush West Indies even though Sunil Ambris (43) and Jomel Warrican (41) delayed them a bit with a ninth-wicket stand of 63.

That meant that 15 wickets had fallen in 54.1 overs on Saturday, after 17 went down the day before. Taijul now has 40 Test wickets in 2018, the first time a Bangladeshi bowler has managed as many in a calendar year.

Leading Bangladesh’s charge was the allrounder Shakib Al Hasan who claimed his 200th Test wicket in a spell of 3-0-5-2 with the new ball, and Taijul Islam who struck twice in five balls as three wickets fell for no run just before lunch en route to figures of 6/33.

Shimron Hetmyer began the afternoon session by hitting Shakib for two fours and a six in successive deliveries, but his gung-ho approach resulted in a simple catch to long-off for 27 from 19 balls. Taijul then won a third straight lbw appeal to have Shane Dowrich out for 5, and when he bowled Devendra Bishoo for 2 to signal the drinks break, his figures were 6-1-10-4.

A fifth came Taijul’s way after the interval when he won an lbw shout off Kemar Roach, but the sixth took a while as Warrican and Ambris showed admirable grit and some free-hitting confidence to stall Bangladesh’s charge. A miscued slog saw Warrican well held at deep midwicket by Shakib, and one run later Taijul finished the match with his sixth when he had Ambris caught behind.

Earlier, Bishoo claimed 4/26 as Bangladesh threw away their last three wickets for three runs. Shannon Gabriel bowled Mushfiqur for 19 with a ball that jagged in and kept low, leaving Bangladesh 69/6. An under-100 total was averted by Mahmudullah (31) and Mehidy Hasan Miraz whose 18 helped injected vital runs to Bangladesh’s total until he was foxed by a lovely legbreak from Bishoo.

Teenage debutant Nayeem Hasan, who on Friday became the youngest player ever to claim five wickets in an innings on Test debut, made 5 before he was dismissed by Bishoo. Dropped on 15 by Hope at slip off Bishoo, Mahmudullah ventured down to hit Bishoo for six and consistently worked the ball off his pads to ensure he wasn’t bogged down. But one adventurous shot too many ended his innings on 31, when a mistimed paddle scoop settled in Hope’s hands at slip. 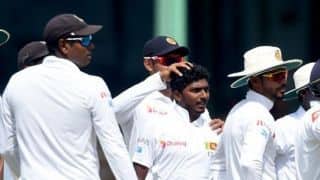