An increasing number of high totals, feels Glenn Maxwell, is not necessarily good for the sport.

As he prepares to leave England to link up with his Australian team-mates for a pre-World Cup training camp, Glenn Maxwell has predicted a high-scoring tournament this summer.

With first-hand experience of being on the wrong end of two white-ball defeats on English soil in which 400 was scored with ease – one last year while playing for Australia and earlier this month for Lancashire in the Royal London One-Day Cup – Maxwell warned bowlers around the world to expect a tough time this summer.

Half-joking on radio station SEN, Maxwell referenced his experiences of playing at Trent Bridge over the past year when he spoke of the batting-friendly surface.

“I’ve chased nearly 900 runs in 100 overs in my last two games at that venue,” he said. “I’d be surprised if there wasn’t a bunch of 400 (runs innings scored in) games in the World Cup. The wicket squares go right across the ground, the outfields are fast and hard and the wickets are playing so well.”

The increasing number of high totals scored in ODI cricket, felt Maxwell, was not necessarily good for the sport.

“I don’t like them getting too high,” he said. “It does make it entertaining, but it does get to the point of you don’t know where to bowl. It comes down to the wickets being produced. If they’ve got nothing in them no movement, no swing, no spin it makes it very hard for teams to defend. If there’s nothing in the wicket it makes it extremely hard for the bowling team to compete.”

Maxwell will leave Lancashire after Tuesday’s One-Day Cup match to link up with defending World Cup winners Australia at a training camp in Brisbane. His place at the county will go to Jake Lehmann, son of former Australia batsman and coach Darren Lehmann. 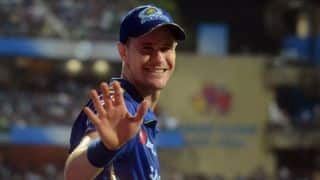