Pakistan last beat New Zealand in ODIs in December 2014, and now need to avoid a 13th successive loss to keep the series alive.

Kane Williamson’s New Zealand  will seek to extend their winning streak against Pakistan in ODIs to 13 when they meet in Abu Dhabi on Friday, in hopes of wrapping up the series with a game to spare. The Blackcaps lost all three T20Is to the top-ranked side in the format but bounced back to claim the first ODI by 47 runs, a win headlined by Trent Boult’s hat-trick and Ross Taylor’s public signal regarding what he believed was an illegal action by Mohammad Hafeez.

Boult joined Danny Morrison and Shane Bond as the only New Zealand bowlers with ODI hat-tricks, but the win was completed by some good work from Lockie Ferguson and Colin de Grandhomme. New Zealand’s batting was shaky, with Pakistan spinner Shadab Khan taking three wickets in four balls, before the lower order propped up the score to 266/9. Playing out the threat of Shadab will increase New Zealand’s chances of victory.

Taylor’s throwing gesture with his right arm was a question on the legality of Hafeez’s bowling action, and heated conversations ensued between Pakistan captain Sarfraz Ahmed and the on-field umpires. Sarfraz later slammed Taylor’s gesture, which adds spice to a contest which has turned around after New Zealand lost all three T20Is.

Weather: Sunny with a high of 31 degrees

After the hat-trick rocked their top order, Pakistan may be inclined to add batting power in one of Asif Ali or Faheem Ashraf and drop either Junaid Khan who went wicketless in nine overs.

New Zealand are unlikely to tinker with a winning unit, unless they drop Henry Nichols for BJ Watling. Nichols was out first ball in the first ODI.

– Nichols has four ducks in his last nine ODIs, apart from scores of 1 and 1.

– New Zealand have the best record against Pakistan of all visiting teams to play in Abu Dhabi – five wins out of six ODIs.

“I will say that Taylor’s action was not correct. It’s not his job to give (the) action which was shown on TV. It was disgraceful, for me.” – Sarfraz

“Nice to be back out there and get the win for the boys. I think the new ball is a key part of the game and we know what early wicket can do to chasing totals.” – Boult 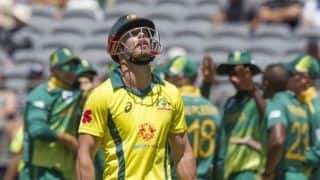