Australia will take their 1-0 lead into the third and final match to be played in Sydney on Sunday.

Persistent rain forced the second T20I between India and Australia at the Melbourne Cricket Ground being called off on Friday. The contest was halted after Australia scored 132/7 in 19 overs. However, rain continued to play hide and seek which eventually led to abandonment.

Australia will take their 1-0 lead into the third and final match to be played in Sydney on Sunday.

The target was first revised to 137 from 19 overs which became 133 from 18 and then 90 from 11. Finally, it was reduced to a five-over shootout with India needing 46 to win but just when the players walked out into the field, the rain resumed resulting in washout.

A late recovery after their top order was blown away by India seamers saw Australia reach a respectable 132/7 in 19 overs before rain stopped play. After a brief rain delay, the target was revised to 137 from 19 overs.

The pace trio of Khaleel Ahmed, Bhuvneshwar Kumar and Jasprit Bumrah reduced Australia to 41/4 in 6.3 overs after Virat Kohli opted to field. Aaron Finch went after an outswinger from Bhuvneshwar and was out caught behind for a first-ball duck. That set the template as a series of poor shots left Australia innings in tatters.

The match was off to an eventful start with Bhuvneshwar struck with the second ball of the match. He could have added two more wickets had India not grassed two catches in the space of four deliveries to let off D’Arcy Short and Chris Lynn.

The tourists were lucky as neither of the two failed to capitalise on the reprieves. Lynn sliced one to deep point to hole out for 13 off Khaleel. Short dragged one onto the stumps from Khaleel to be bowled for 14. Under overcast conditions, Kohli expectedly opted to bowl firs and his bowlers repaid him handsomely.

He persisted with pace even after the Powerplay and was rewarded with Bumrah removing Marcus Stoinis (4) cheaply. Glenn Maxwell and Ben McDermott put up some resistance.

The spinners then took over and soon Australia were struggling to score runs, let along find boundaries. Krunal (1/26), who was clubbed for three straight sixes in Brisbane by Maxwell, got his revenge when he slipped one past the Australian’s defenses to have him bowled for 19. The pressure of scoreboard got to Alex Carey and when he departed, the hosts were tottering at 74/6 before Nathan Coulter-Nile’s cameo saw them launching a late comeback bid.

Coulter-Nile, who replaced Billy Stanlake, got off the mark with a six. He added a four and another six to his total to sprint to 18 off 8 before playing one shot too many to become Bhuvneshwar’s second victim.

The 18th over turned out to be the most productive of Australian innings as Khaleel was creamed for 19 runs. Andrew Tye clattered two consecutive fours in it and Ben McDermott (32 not out) rounded off with a six over midwicket. The rain appeared in the beginning of the penultimate over but the play continued despite Kohli expressing his displeasure.

Bumrah went on to complete the over before the covers were called and players went off the field. 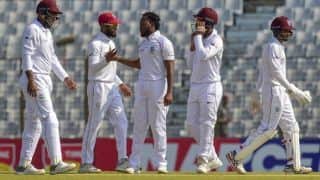