At stumps, Zimbabwe - who were dealt a blow in the form of Tendai Chatara ruled out of the Test - were 25/1.

Bangladesh took control of the second Test versus Zimbabwe at Mirpur on day two, as the former captain Mushfiqur Rahim  became the first batsman  from his country to register two Test double-centuries.

Mushfiqur, from an overnight 111, moved on to 219 not out when the declaration came at 522/7 – the highest score by a Bangladesh batsman and the longest individual innings in terms of balls faced and minutes batted. At stumps, Zimbabwe – who were dealt a blow in the form of Tendai Chatara ruled out of the Test – were 25/1, trailing by 497 runs.

The wickets of Bangladesh skipper Mahmudullah for 36 and Ariful Haque for 4 to give pacer Kyle Jarvis five wickets briefly lifted Zimbabwe after Chatara was stretchered off the field, but then came a stand of 144 for the seventh wicket between Mushfiqur and Mehidy Hasan Miraz who hit a career-best 68 not out.

Mushfiqur opened up with two fours and a six as he crossed 150, and then proceeded to score a monumental double-century. He was 219 not out from 421 balls faced, having hit 18 fours and one six. Mehidy collected five fours and a six in his fifty.

Faced with no option but to knuckle down, Zimbabwe skipper Hamilton Masakadza (14) and Brian Chari (10*) batted out 14 overs before the former was dismissed by Taijul Islam, edging to first slip where Mehidy held a good catch. 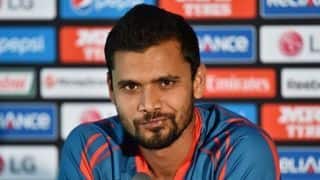 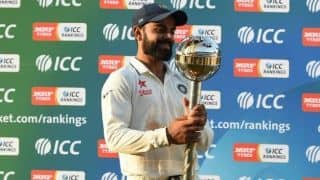