Sri Lanka made England's bowlers work hard on Saturday as Dimuth Karunaratne and Dhananjaya de Silva put on a 142-run third-wicket partnership on day two of the third and final Test.

Sri Lanka made England’s bowlers work hard on Saturday as Dimuth Karunaratne and Dhananjaya de Silva put on a 142-run third-wicket partnership on day two of the third and final Test.

But just before tea de Silva fell for 73, falling to a fine catch by Keaton Jennings — his second of the innings after getting Danushka Gunathilaka — at short leg off Adil Rashid.

At tea in Colombo, Sri Lanka were 183 for 2. Karunaratne, dropped at slip by captain Joe Root off Stuart Broad early in his innings, was unbeaten on 81 with Kusal Mendis not out 6.

Seeking to prevent a 3-0 series whitewash, earlier in the day Sri Lanka’s bowlers had wrapped up England’s first innings for 336 within half an hour, the visitors losing their final three wickets for just 24 runs.

On Friday, Jonny Bairstow had put his marker down to be England’s permanent Test number three with a no-nonsense 110, with partnerships of 100 with captain Joe Root and 99 with Ben Stokes.

But resuming on 312/7 on Saturday, Moeen Ali, continuing his indifferent series with the bat, fell for 33, Stuart Broad for a duck and Jack Leach for 2, and Sri Lanka were bat-in-hand after five overs.

Ali had skipped down the pitch and lifted the ball to long off, Broad was bowled trying to sweep left-arm wrist spinner Lakshan Sandakan and Leach’s attempted heave saw him caught.

Sandakan was the pick of Sri Lankan bowlers, taking five wickets for 95 runs — he was also the least economical — while finger spinners Dilruwan Perera and Malinda Pushpakumara took 3 for 113 and 2 for 64 respectively.

Gunathilaka was the only man out for Sri Lanka before lunch, caught close-range by a falling Jennings around his midriff for 18 off Leach, the Somerset left-arm spinner’s first left-handed victim of the series.

Karunaratne and de Silva then battled away under pressure from England’s bowlers, with Leach and Ali getting decent turn and Broad and Stokes coming in aggressively.

Just before tea, a short ball from Stokes hit Karunaratne in the sternum, requiring physio attention. 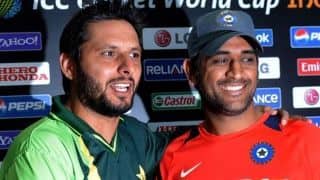