Shikhar Dhawan continued to look good even as Aaron Finch was dismissed.

Shikhar Dhawan continued to look good for Sunrisers Hyderabad (SRH) in their match against Kings XI Punjab (KXIP) in their Indian Premier League (IPL) 2014 match. Shivam Sharma, bowling the ninth over, dismissed Aaron Finch off the very first delivery. Naman Ojha was the new batsmen in. He and Dhawan took a few singles in the over to get to 67 for one at the end of nine overs.

Left-arm spinner Akshar Patel came on to bowl the eighth over, and kept things tight as well. After bowling a dot ball to begin with, he gave away just a couple of singles off the next two balls. Dhawan took on Akshar off the penultimate ball of the over, hitting a six through midwicket to end the over on a high.

Shivam Sharma came on to bowl the seventh over to Aaron Finch. He bowled a terrific over, and didn’t give away a single run off the first five deliveries. Finch managed to take a couple off the final ball of the over, but they were unable to get more runs.

Earlier, Shikhar Dhawan started to cut loose. After hitting Sandeep to all ends of the park, Dhawan even took on Mitchell Johnson as he hit him down the ground for a boundary, and then pulled him for just a single. Signs were ominous for the KXIP bowlers.

Sandeep came back for his third over on the trot, and induced a false shot from Aaron Finch to begin the over. Glenn Maxwell backpedaled to take a terrific catch, but it was a no ball. Sandeep followed it up with another no ball, that was hit for four by Dhawan. Dhawan was looking in great touch, as he hit Sandeep for another boundary before going down the ground and hitting him for a six. Sandeep’s nightmare over didn’t end there, as Dhawan pulled him for the third boundary of the over. Sandeep responded by bowling wide, and Dhawan hit him over covers for yet another boundary. Dhawan got a single off the last ball to make it 26 runs off the over.

Mitchell Johnson, bowling the fourth over, started with a couple of quick balls to Aaron Finch. He bowled a wide, but conceded no runs off the bat for the first two legal balls he bowled. A mis-field from Shivam Sharma enabled the batsmen to get two runs off the third ball. Johnson gave no room to Finch for him to free his arms, and kept him quiet by giving away only five runs in the over.

Earlier, Shikhar Dhawan and Aaron Finch got off to a slow start. Sandeep Sharma came back to bowl his second over on the trot. Dhawan tried to advance down the track and play the ball through covers but got an inside edge for just a single. Finch managed to get a boundary through point with a deft dab, using Sandeep’s pace against him. Sandeep responded well, by conceding only a single off the next two balls. There was an appeal for a run out off the fifth ball of the over, but Finch was safe. SRH got to 18 for no loss after the first three overs.

Earlier, KXIP won the toss and elected to field first. Young right-handed batsman Manan Vohra was included at the cost of Mandeep Singh, while off-spinner Shivam Sharma came in to replace medium-fast bowler Parvinder Awana. SRH came in with the same team. 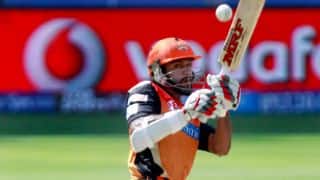