AB de Villiers scored 66, while Mandeep Singh was unbeaten on 54.

AB de Villiers and Mandeep Singh led a terrific resurgence that saw Royal Challengers Bangalore (RCB) post a commanding 180 for four in the Indian Premier League (IPL) 2015 Eliminator against Rajasthan Royals (RR) at Pune on Wednesday. After Chris Gayle and Virat Kohli put on 41 for the opening wicket, both batsmen were dismissed in quick succession. Just when it seemed RR were on top, Mandeep and de Villiers led RCB’s fightback with a 113-run stand for the third wicket. Live Scorecard: Royal Challengers Bangalore (RCB) vs Rajasthan Royals (RR), IPL 2015 Eliminator

Gayle started proceedings for RCB quite well, smashing a boundary off the second delivery of the match. He then greeted Dhawal Kulkarni by hitting him for a four and a six in his first over. Gayle then hit Chris Morris for two boundaries in an over. However, Kulkarni had the last laugh, getting Gayle bowled in his next over for a 26-ball 27. Kohli was out soon thereafter, getting a leading edge back to Kulkarni for 12 off 18 balls. Live Updates: Royal Challengers Bangalore (RCB) vs Rajasthan Royals (RR), IPL 2015 Eliminator

That brought in Mandeep Singh to join de Villiers, who had come in at No. 3 as usual. At the start of the partnership, it was Mandeep who took charge. RCB were struggling at 47 for two in nine overs when he hit a four and a six off Kulkarni. He then hit two boundaries off James Faulkner is the Australian’s next over. He showed excellent hand-eye coordination and quick footwork. IPL 2015 Highest wicket-taker: List of best bowlers in IPL 8

At the other end, de Villiers was content with taking the runs in ones and twos to begin with. He let Mandeep dominate initially. At the end of the 14th over, de Villiers was on 17 off 21 balls, while Mandeep was on 28 off 19 balls. One over later, de Villiers had jumped to 35 off 26. There was no looking back after that, as de Villiers started finding the sweet spot of the bat much, much more often than not. IPL 2015 Highest run-scorer: List of best batsmen in IPL 8

The duo added 113 runs in very quick time before de Villiers was run out for 66 off 38 with four fours and as many sixes. Mandeep did not allow the dismissal to deter him, hitting a four and six in the same over to bring up his half-century. Dinesh Karthik got off the mark with a six first ball, but was out soon thereafter as RCB ended on a commanding total of 180 for four. Indian Premier League (IPL) 2015: Complete coverage 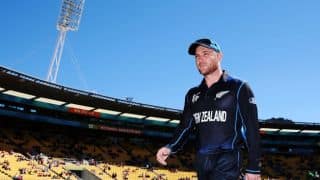