Akshar Patel and Shivam Sharma were bowling well for KXIP.

Mitchell Johnson bowled the 14th over of the innings in the Indian Premier League (IPL) 2014 game played between Royal Challengers Bangalore and Kings XI Punjab. Johnson, who had gone for just nine is his first two overs, started off with an excellent yorker, but Starc was able to get a single off it. Starc managed to hit a boundary off the fourth delivery, but could only get a single off the last ball.

Shivam came on to bowl the 14th over, and was greeted with a six by de Villiers. Starc went on to get another boundary off the third ball. He tried to slog the next one over midwicket, but was beaten comprehensively. Starc was unable to work the ball off the square off the next couple of balls, but got a single off the last ball.

Akshar Patel bowled another tight over as neither de Villiers nor new man Starc was able to work him away. He was mixing his pace well and was not easy to hit away for runs. Akshar continued his good run of form.

Earlier, AB de Villiers looked solid, but wickets kept tumbling in the Indian Premier League (IPL) 2014 game played between Royal Challengers Bangalore and Kings XI Punjab. Shivam Sharma bowled the 12th over, and got Albie Morkel out straight away, caught off a miscue at point. AB de Villiers kept the attack going, hitting another six off the over.

Earlier, In the Indian Premier League (IPL) 2014 game played between Royal Challengers Bangalore and Kings XI Punjab, Bangalore lost their way after losing quick wickets. In fact they lost four wickets before the ninth over of the game. The likes of Virat Kohli and Chris Gayle got out cheaply. Even Parthiv Patel who looked in fine touch was dismissed during the sixth over of the game. Sandeep Sharma the swing bowler was the wreaker in chief as he took three wickets in quick succession. He swung the ball late and bowled at good pace for Bangalore. Sachin Rana, who was picked for the match didn’t survive long as he got out to Akshar Patel for 18 runs.  To make it worse for them Yuvraj Singh continues to struggle for runs. AB de Villiers is one batsman who has looked comfortable at the crease till now but he perhaps has too much to do as they are chasing a monstrous score on the board. The required run rate has climbed up to over 13 runs required per over. 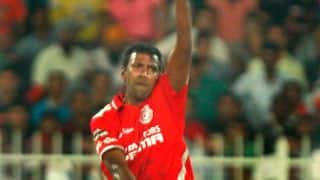