Dehradun: Afghanistan spinner Mujeeb Ur Rahman led an inspirational bowling attack to help dismiss Ireland for 161 despite an unbeaten 89 from Paul Stirling in the first one-day international on Thursday.

Ireland, who were whitewashed in the recent three-match Twenty20 series against the Afghans, lost three early wickets to Rahman’s mystery spin after electing to bat first.

Rahman claimed skipper William Porterfield for nought in his very first over and then struck twice on successive deliveries in his fourth over to put Ireland on the backfoot at 14 for three.

Stirling, a portly opener who is playing his 101st ODI, hit 6 fours and 3 sixes in his 150-ball stay at the crease before being bowled by Gulbadin Naib in the final over of the innings.

The Asghar Afghan-led Afghanistan need 162 to take an early lead in the five-match series. 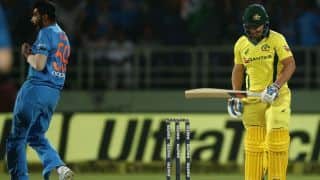