Needing 118 runs to win, Afghanistan won by seven wickets before lunch on day four in Dehradun.

Fifties to Rahmat Shah and Ihsanullah in a partnership of 139 has taken Afghanistan to their maiden Test match victory, a historic seven-wicket win over Ireland in Dehraun on Monday.

From an overnight 29/1, Afghanistan finished the chase before lunch to spark unforgettable scenes. Ihsanullah, dropped on 18, ended on 65 not out and Rahmat followed his first-innings 98 with 76 before he was dismissed with three runs needed to win.

Ishanullah was give a massive slice of luck early in the day when Stuart Thompson put down a simple catch at short extra cover when the batsman chipped George Dockrell in the air. It was a huge drop, which Ihsanullah used to convert into his highest Test score. (SCORECARD: AFGHANISTAN vs IRELAND)

Rahmat took Tim Murtagh for two fours in the second over of the day, both sliced past backward point, and then after a four consecutive maiden overs he opened up with a cut shot for four off the same bowler. Ihsanullah used his feet well to the spinners and the odd short ball was punched away with ferocity. Thompson was hit for two fours by Rahmat in his opening over and not called on again. (READ: Rashid Khan takes five, Afghanistan chase 147 to win)

Rahmat raised his second Test half-century off 77 balls with a sweep for four off Dockrell. In the 38th over, Ihsanullah took 14 runs off Andy McBrine, using his feet to hit two fours and six. His maiden Test fifty came up 109 balls.

The pair drove Ireland’s spinners well and had few issues, barring a couple beats and inside-edges, to steer Afghanistan to victory. Two fours off Andy Balbirnie to Ihsanullah reduced the asking to seven runs, and when Rahmat cracked James Cameron-Dow for four off the first ball of the next over the Afghanistan team huddled together.

Then, seeking the winning boundary, Rahmat charged out to the left-arm spinner and was stumped. Off the next ball, Mohammad Nabi was run out for 1 when coming back for the second.

The moment of victory came moments later when Hashmatullah Shahidi pulled his first ball to the deep midwicket boundary for four. 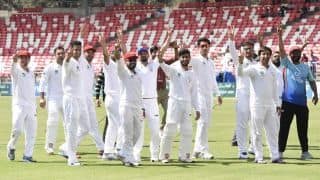